Writing Magazine regular, creative writing MA tutor and novelist James McCreet reveals how he got published and shares his advice for aspiring writers. ...

Author, MA creative writing tutor and Writing Magazine regular James McCreet reveals how he got published and shares his advice for other aspiring writers

‘When I was 14, I told a careers teacher I wanted to be a writer. He laughed and suggested accountancy. When I was 18, I was told by my English teacher that training to be a librarian might be a more realistic goal. When I was 38, I received an email from an international publisher offering me a multi-book deal. I’d like to say that the years in between were the formative ones, but I’ve probably learned more since 2009 than I did in the ‘wilderness years’.

As well as being an occasional contributor to Writing Magazine, James McCreet is also a full-time writer, dividing his days between corporate copywriting, historical crime novels and tutoring on Sheffield Hallam's Creative Writing MA. Here, he answers questions on his journey to publication and the lessons he’s learned.

Have you always written?

I remember sitting at home as a nine-year-old and writing long stories in pencil which I’d give to my teachers on Monday. I’m not sure they were ever read. I also kept journals for many years and have attended many creative writing groups since the age of 16, but, in retrospect, I’m not sure I ever really believed I’d be published. It was just a dream.

How did you make that dream a reality?

It began with an epiphany that came to me after doing a Master’s degree in 2005. I was wondering how I was able to write a 20,000 word thesis but not a novel. I realised that I had to approach my creative writing as I approached academic writing: by doing a large amount of research, planning and structural groundwork. I’d been assuming that the creative muse was sufficient to sustain me for 100,000 words and it was that delusion that had prevented me from serious writing.

So how did your first book come about?

It’s a terrifying thought at the time, but the truth for most writers is that their first book may never be published. It’s just a necessary apprenticeship, a rite of passage that teaches you how to produce a long text. Only by actually completing it do you gain the experience and confidence to continue. Accordingly, my first was an 85,000 comic travelogue based on my years living in Greece. It is awful – an almost total failure. Perhaps twenty agents or publishers rejected it out of hand.

In retrospect, what do you think was wrong with the book?

A couple of editors remarked that the writing was fine, but in the end it was little more than a collection of anecdotes held together by a weak theme. The chapters stood alone as amusing vignettes, but they didn’t cohere.

You continued writing nevertheless. Why?

The first book taught me lessons I’d never learned from books or courses. It taught me the discipline of doing a set number of hours a day; it taught me how to gauge the pace of narrative and how to establish an equilibrium of description, dialogue and exposition; it taught me – above all – that a book requires time and patience to grow. Getting it perfect first time is a barrier to development. I learned to write and never look back until the whole thing was finished. The concept of a second draft is what freed me and by the end I had written an actual book – something I’d never dreamed I could actually do. That gave me the confidence to continue.

You chose Victorian crime for your next book. Why that genre?

A friendly editor at Harper Collins gave me some good advice while rejecting my Greek book. She emphasised the absolute need for commerciality and marketability – something I’d naively resisted in the name of ‘art’. My MA thesis had been on the development of detective fiction and so I decided to capitalise on that knowledge to write in a genre that I knew was highly durable, marrying my academic interests with commerciality. At the same time, the era was so rich in narrative possibilities that I felt confident I’d be able to create an engaging story. 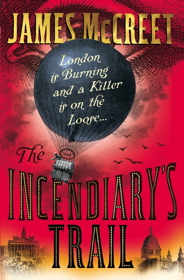 And did this book teach you as much as the first?

Much more. The Incendiary’s Trail was really character-driven while also painting a very vivid picture of Victorian London. I had to learn how to bring the characters to life through their interactions and dialogue. I had to consider plot twists to set challenges for them and I had to maintain a really sharp focus on the reader. In crime books particularly, you have to carefully monitor pace and story so that the reader is always compelled to read on. I spent months researching and planning.

How did you get published?

I went through all the usual rigmarole of sending off SAEs to agents and publishers, all of whom rejected the book. It was depressing – one agent accidentally enclosed three fuzzily-photocopied rejection slips and I had a vision of a slush-pile production line. I’d actually given up and formally decided not to write or submit anything else when Macmillan New Writing emailed to say that they wanted to publish the MS I’d emailed to them about three months earlier.

Frankly, unreal. It had been my dream for so long that I couldn’t believe it when it happened. Until I signed the contract, I half-suspected that it was an elaborate prank by one of the many people who knew I was trying to get published. Even now, when I see that one of my books is available at an Australian public library, I can’t quite associate the books with myself. The reality is me alone at my laptop; everything else is abstract.

Is there a sense of having ‘made it’?

That’s what I expected, and there was certainly a huge sense of vindication: that I was, after all, the writer I’d always believed myself to be. But as I read through proof copies of the first book, I began to see numerous instances of how I could make it better. The second book was my chance to be even better and when I’d finished it I thought it was the very apogee of my ability. Then I wrote the third and the fourth, each time learning from its predecessor to hone the writing. I discovered that I’m still learning and there is little sense of having ‘arrived’. If anything, publication was the very first step in a totally new journey. It’s a different league and the standards are continually rising.

How do you measure success?

It would be wonderful to be as rich and successful as JK Rowling, but the hard truth is that most writers have a day job. It can take years to get established (if it happens at all) and even then the financial rewards are moderate. I tell myself that I have achieved the dream I’ve had since childhood. Nobody can take that away. My sense of accomplishment is my success. Also, I continue to write in search of that upper limit of ability. When I’m as good as I can be, then I’ll have ‘made it’. 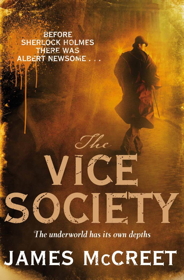 Will you continue with the detective novels?

The harsh reality is that the choice is partially out of my hands. If the books sell well, the publisher will ask for more. If not, another publisher or agent is unlikely to be interested. I’m currently researching a different kind of book with some of the same characters in order to diversify my writing. Remaining relevant and marketable is as important as trying to be a good writer (or is it the same thing?)

What advice would you give to aspiring writers?

Concentrate on writing your book before you start worrying about agents or publishers. You will only interest them if your manuscript is the best thing they’ve seen this year, and that goal is best achieved by becoming as good as you can be. I’ve met a lot of writers who know everything about submissions and markets and publishing trends without even having a finished book. It might be your second or third book that gets published, so get the first one done now! 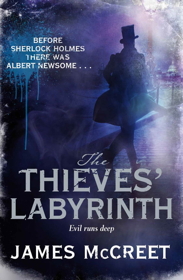 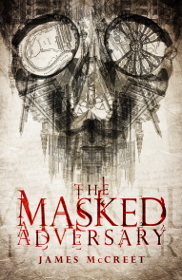 James McCreet is the author of the Victorian crime thrillers The Incendiary’s Trail, The Vice Society, The Thieves’ Labyrinth and The Masked Adversary, and the writers' advice guide, Before You Write a Word.
Visit his website: www.jamesmccreet.co.uk