The most popular book genres: what do your readers want?

The most popular book genres what do your readers want

What do readers want? What are the most popular book genres, by sales and by earnings? We break down the figures to give you the publishing industry insight

When we write, we want to write what we love reading. That may be crime, romance, or something else. But as writers, it's important to ask ourselves: what do our readers want? It’s really helpful to know how what we’re writing will fit into the marketplace. If we’re aiming to write commercial fiction or non-fiction and make money from writing, it’s a good idea to be aware of what’s being read and what the most popular book genres are in terms of sales and readers.

We’re not suggesting you decide to write a crime novel just because it’s the most popular book genre, because it’s important to write the book you want to write. But it’s also a good idea to know where your book might fit into the marketplace. Knowing which genres are popular will help you make sound commercial decisions about where your fiction might end up in bookshops and who your readers might be.

But what makes a book genre popular? It’s a question we often get asked. Is it being most read, most bought or most lucrative? We’ve been trawling through figures and statistics to give you the low-down on the book genres that are most read, most sold and bring in the most revenue. 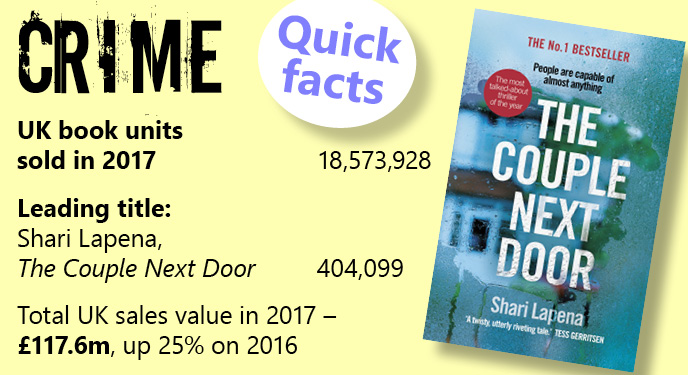 As book readers, it seems we're obsessed by the dark side of life. In 2017, crime became the UK’s most popular adult fiction genre, outselling general and literary fiction for the first time.

• Readers are flocking to buy books in the crime genre. In 2017, Nielsen BookScan figures revealed that 18.7 million units of crime books were sold, compared to 18.1 million of general and literary fiction. The value of the crime book sales increased from £106.3 million to £117.6 million. The general and litfic sales value was higher, though: at £125.7 million it was the genre that generated the most cash.

• Nielsen BookScan data released at the London Book Fair this year showed that sales of crime fiction in the UK had increased by 19%, to 18.7 million.

• In 2017 Shari Lapena’s The Couple Next Door sold 404,099 copies, making it the UK’s bestselling crime title of the year, and the third bestselling book.

• Statistica’s research shows that mystery/thriller/crime was the US’s most popular genre too, with 47% of the survey respondents having read a crime book up to July 2015 – and with ebook readers the figure was 50%. According to the 2018 Author Earnings annual report, mystery, thriller and suspense ebook sales accounted for $187,673,043.62 of revenue.

• The popularity of psychological thrillers has given the crime book genre as a whole a huge boost. Paula Hawkin’s The Girl on the Train accounted for 1.3 million print sales and 2.4 million ebook sales in 2015, the year it was published. By 2018 it had been awarded triple platinum status at the Specsavers Bestseller Awards for topping sales of 3,000,000.

QUICK LINK: Plot and execute your bestselling crime novel with expert advice on our creative writing course, How to Write Crime. 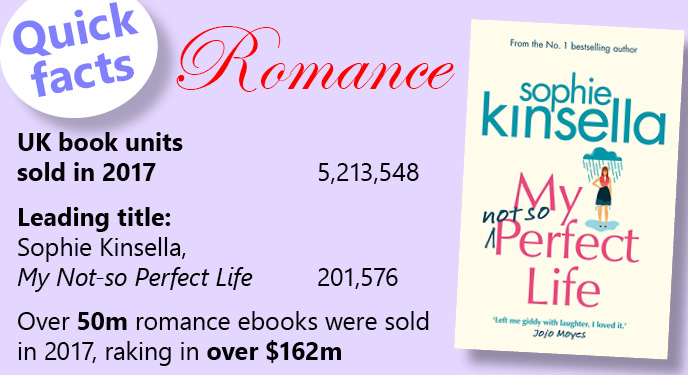 We're all suckers for love stories, and romance book lovers are willing to invest serious money in their reading habit. Romance fiction is a billion-dollar genre, with estimated sales peaking five years ago at $1.08 billion according to Bookstats, and $1.44 billion including self-published titles.

• As reported by Nielsen BookScan, romance had a 34% share of the US fiction market in 2015. 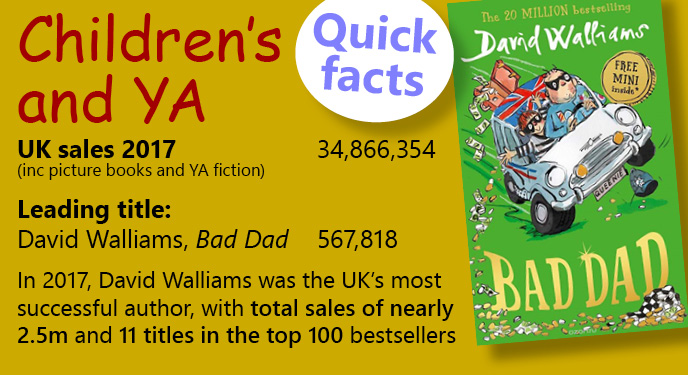 It takes a lot of skill to write books that younger readers will love, but if you can write well for children there are hordes of avid young readers (and their parents!) waiting for new books to feed their reading habit.

• Globally, children’s book sales outstrip adult titles, and continue to grow. In the US, BookScan reports that in 2017, 233 million units were sold compared to 181 million in 2012.

QUICK LINKS: Writing for children is easy? Are you sure you understand what's required in modern children's books? Understand the differences in writing for children and adults with advice from from KJ Whittaker. And when you do, enter our Picture Book Prize Competitition!

Sometimes everybody needs a bit of help to understand the world they live in, and that's were self-help books comes in. You may not see them on the bestseller lists but they're steady sellers reaching a readership happy to pay to knowledge. Self-help, self-improvement and inspirational literature are a growth area for the publishing industry.

• At the end of 2013 the Guardian noted that the self help industry was worth $11 billion dollars a year, with $720 million of that generated by book sales according to TheRichest.

• The bulk of self-help and inspirational literature sales come from the USA, where in 2017 the top four bestselling non-fiction titles were self-help books. 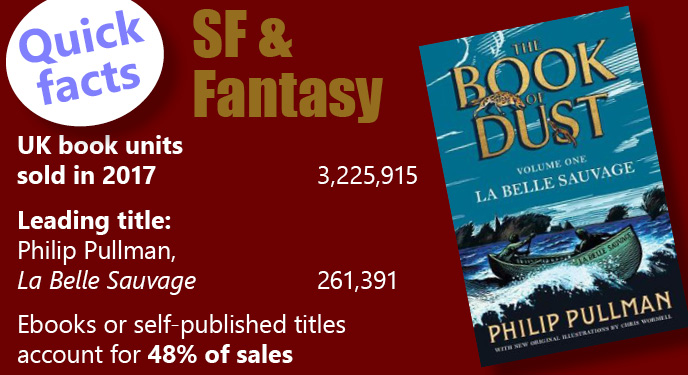 If you write well in your chosen book genre, two of the great rewards (besides sales!) are reader loyalty and reader interest. Science fiction and fantasy fans are always happy to discover excellent new titles in their genre, and spend money on new reading material.

• The loyalty of sci-fi and fantasy readers to their chosen genres is demonstrated by the consistent high sales of titles in these genres. In 2017 it was the third best-selling adult fiction genre in the UK, with sales of 3,225,915 units.

• Sales in these book genres are entirely reader-focussed and have a lot to do with the shift towards indie publishing. Although sci-fi and fantasy sales dropped dramatically in 2009, Forbes reports that combined print and digital sci-fi and fantasy book sales have doubled since 2010, and because genre fiction is a particular growth area in indie publishing, self-publishing and ebook sales account for 48% of SF and fantasy sales across print, digital and audio formats.

• Interest in the sub-genres changes, though. Although epic fantasy and space opera still sells consistently, between May 2017 and April 2018 the most popular sub-genre in ebook sales was paranormal and urban fantasy, and the most popular ebook sci-fi genre was military sci-fi.

When you ask yourself, what genre should I write, we’d like to think this information will give you some insight into what’s selling in the book world and helped you to understand the marketplace. Next time you go into your local bookshop, you’ll look at the titles on the shelves with added insight into why they’re there.

Can you imagine your own book on the shelves with the popular titles in that genre? We hope so! And we’d love to see your books and hear your success stories in our Subscriber Spotlight pages and in our Subscriber Showcase. Be sure to benefit from this service when you become a subscriber to our bestselling magazine.