Science fiction: Creating a vision of the future Writing is an important way to imagine the future. Our imaginations give us access to different images of what might be, and what might become of human society in the years to come.

For decades, science fiction has been exploring the possibilities of human activity in a world of increasing technological progress. Writers have been split between presenting the future as a fully automated utopia, or a dystopia of control and obedience. In my view, the latter vision is more important. As writers, we can uncover the risks of emerging technology, social networks, and government surveillance, giving us new stories to re-assert control over our own lives.

In the early 20th century, writers were split on the future. By the 2020s, the economist John Maynard Keynes predicted, people would only work fifteen hours a week. Technology would advance so much that our basic need for food, shelter and security would be met automatically, leaving us greater time for leisure. Other writers predicted that house chores would be automated, illness would be a thing of the past, productivity would be so high across several essential industries that our hours could be cut dramatically.

Aldous Huxley had a different vision. Instead of freeing us from work, technology would be used to control us. In Brave New World, he imagined a world where workers were genetically reproduced for their caste in society, psychologically manipulated by their education system, and kept compliant with a happiness-inducing drug called Soma. Huxley predicted a world where people would be controlled by their pleasures and live in an increasingly trivial society. 'People will come to love the oppression, to adore the technologies that undo their capacities to think,' said Neil Postman, describing Huxley’s vision.

So which version of the future was more useful and accurate?

The utopian visions of the early-twentieth century proved false. We continue to work longer than fifteen hours a week, house chores still exist, domestic robots do not, flying cars do not, and technology is being used in increasingly sophisticated ways to psychologically manipulate consumers and workers: personalized advertising, disinformation, social credit systems, facial recognition, brain-machine interfaces, and more.

At the same time, dystopian visions of the future have helped policymakers push back against the worst excesses of Big Tech companies. Facial recognition and mass surveillance have been decried as Orwellian, and US policymakers use the term '1984' to interrogate technology companies in public hearings. Novelists have given us words, terms, and phrases to arm us against dystopian realities.

Dystopian writing therefore has a role to play in shaping our understanding of our collective future. But to play this role, dystopian writing has to be accurate and timely. Predictions need to be based on current trends and possibilities. The shift towards near-future dystopias is representative of this. The screenwriters of Her (2013) and Ex Machina (2014) presented realistic threats from the increasing use of artificial intelligence, and the potential emergence of true AI artificial intelligence, that is, AI that is autonomous, and does not require human maintenance.
It might be argued that the threats of technology in our collective future are now obvious. Social media threats have been covered in detail by The Social Dilemma (2020), for example. Government surveillance and cameras were covered in depth by George Orwell’s 1984. But this attitude of ‘it’s been done’ is dangerous and misleading. Storytelling from the time of Homer has been about re-telling and adapting stories to fit the language of newer times. It is not far-fetched to say that even visions of the future need updates, every now and then.

In my new novel, Black Friday 2050, I explore what happens when pleasure is used to control our lives. Tech companies are gaining increasing access to our data. What happens when they use that data to manipulate their users and their employees? Is there a way back from psychological control? Even in presenting the worst excesses of technology however, there is room for hope. By writing out stories about the dark uses of tech, we can help to imagine a better future. 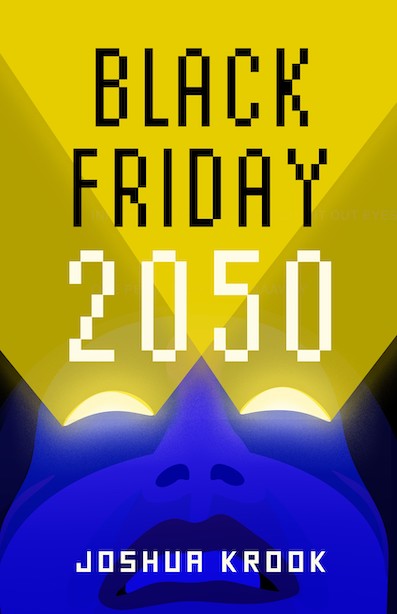 Interested in how to write sci-fi for the 21st century? Read RR Haywood's thoughts on writing that engages with our current society.