How the police work – insider advice for your crime fiction Time to ‘fess up. I know nothing about resecting a bowel or whipping out an inflamed appendix. Why would I? I’m a former detective, not a surgeon. However, despite my shameful lack of surgical know-how, I kind of know the best time for a lead surgeon to break the news to her junior that she’s the mother he never knew, is not while they are elbow-deep in someone’s innards in the operating theatre.
For me, that was a liberty too far in a long running hospital drama which, for years, I had forgiven many an eyebrow-raising scene.
Now that’s slightly extreme but, given until then I’d allowed so much dramatic licence to wash over me, it set me wondering, does reality matter in fiction? As someone who makes a living advising crime authors and TV writers, from novices to Diamond Dagger winners, you might be surprised by my answer. Yes and no.
Only the most fanatical, and possibly misguided, crime fiction fans, read the genre for research purposes. Like most of us they want to be entertained, to invest and become lost in another’s world, and to enjoy the satisfaction of a story well told. When I start work with anyone, be it an author or script writer, I trot out the same mantra: ‘Your story and characters come first.’ They should aspire not for ‘realistic’ but ‘authentic,’ ‘credible’ and/or ‘plausible’ crime and procedure. No one wants a textbook. Unless of course they want a text-book.
I remember one summer evening watching my sons play cricket in the local park, when my friend and co-author Peter James called. He was in the middle of writing a scene in Dead Like You and wanted to know how offenders are supervised once released from prison. As ever, I asked him what he was looking to achieve, then spent an hour taking him through the Multi Agency Public Protection Arrangements. I related this to his story and characters and found legitimate exceptions when the way it should be did not fit. When the book was published, I was delighted to see he had reduced those sixty minutes into one paragraph of pithy prose that drove the story on without overloading the reader.
By contrast, when I set out to a novice author how she could enable a particular officer to interview a suspect, she pasted the whole lot into her manuscript. I pointed out the trick of wearing your research lightly and her second draft was spot on.
One of the most common errors I come across is how officers address one another. Police stations are workplaces like any other, so the usual rules apply.
The service is hierarchical and disciplined where officers all have a rank, but it’s not the army and friendships and camaraderie abound across all levels.
Many of the people I joined with chose different career paths to me. Some stayed constables while others gained a couple of promotions and settled there. One of my closest friends, a Detective Inspector, was the most formidable, funny and hardworking person I know. During briefings, he would address me as ‘sir’, ‘guv’ or ‘boss.’ To others he would refer to me as ‘the Chief Superintendent’ or ‘Mr Bartlett.’ One to one though, it was Bill and Graham. And, believe me, if he disagreed with something he would tell me – loud and clear.
No one ever bellowed ‘Bartlett. My office,’ at me. I was never called just by my surname and, unless it double-hatted as a nickname, nor was anyone else. Most senior officers address their juniors by their first name while juniors call anyone senior – above the rank of inspector – ‘sir,’ ‘ma’am,’ ‘guv’ or ‘boss.’ PCs call sergeants ‘sarge,’ ‘skip’ or ‘sergeant.’ Detectives never refer to themselves as ‘detective.’ Imagine if a police constable called themselves ‘police.’ That’s plain daft. It’s the rank that’s important, so they say, ‘detective constable’ or ‘DC’, ‘detective sergeant’ or ‘DS’ etc.
It can be a minefield but if you don’t know just ask, as I would if writing a medical drama. My one-to-one advice service and online courses guide you in all things crime fiction, so your days of guessing or getting caught out are over. 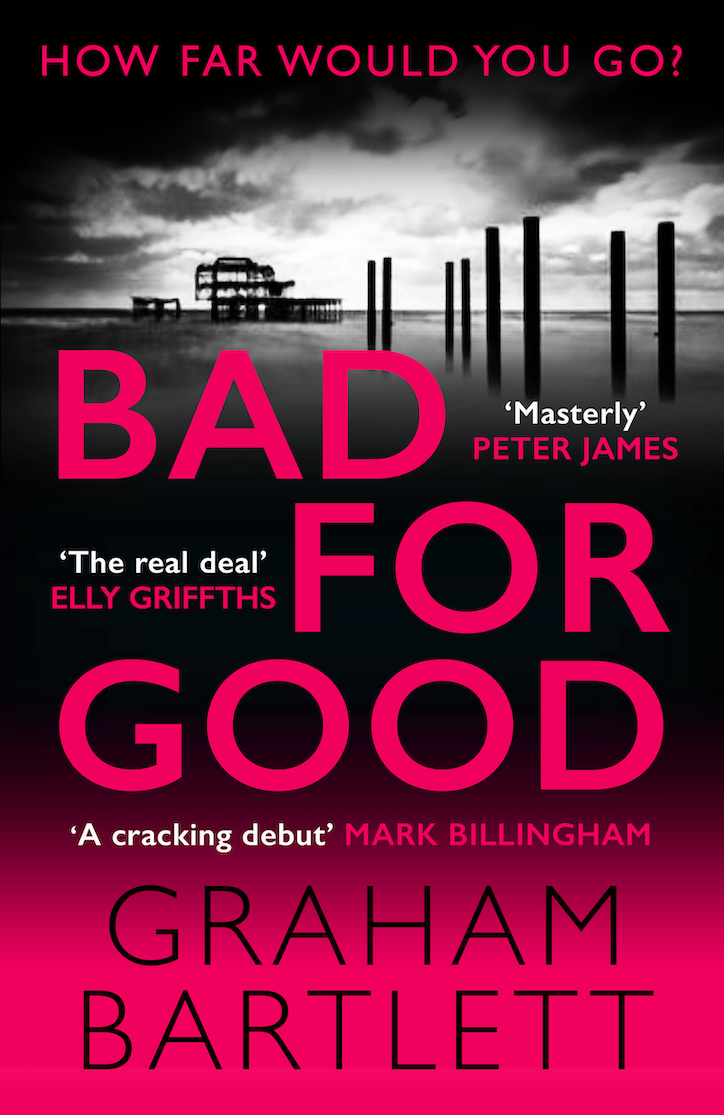 Bad for Good by Graham Bartlett is published by Allison & Busby on 23 June in hardback at £16.99 and is also available as an ebook

Want to read more about getting crime right? These top tips from crime supremo Jeffery Deaver should do the trick!