Historical fiction: How to turn fact into fiction Historical fiction: How to turn fact into fiction Images

Historical fiction is a tricky beast, expected to both entertain and inform.

We all remember the epiphany of reading THAT novel, which made us love the genre – for me, vintage classics such as I, Claudius or Sinuhe the Egyptian. While some authors create entirely fictional characters – think Bernard Cornwall, Patrick O’Brian, Margaret Mitchell, or Robert Harris, who introduces his characters into global events – others feast on the larger-than-life characters who blissfully ignore health & safety and political correctness – such as Conn Iggulden’s ‘Genghis Khan’ trilogy, the Philippa Gregory Tudor- and War of the Roses novels, or even Desiree, the world’s second bestselling #HistFic ever. For an author these can be daunting examples – how to ensure the reader is neither bored by a cold, hard re-telling of historical dates and facts, nor led astray by an unreliable, if not soppy romanticised version of events?

‘So how much fact is in this?’ people ask, sounding slightly suspicious, when hearing about my Tsarina series, especially since both Tsarina and The Tsarina’s Daughter are the first novels ever about either, early Romanov Empress. Given the mediatic omnipresence of Catherine the Great and the morbid fascination with the last Tsar Nicholas II, this seems unimaginable. If my Tsarina rose from rags to riches, morphing from serf to the first ever reigning Empress Catherine I of Russia, The Tsarina’s Daughter Elizabeth, the only surviving sibling of Peter the Great’s fifteen children, in my new novel suffers an opposite fate: She falls from riches to rags, before rising  triumphantly from rags to Romanov in one rollercoaster of a wild, seductive ride. This made writing about her a particular challenge: she acts far ahead of her time, and also daring beyond her sex. 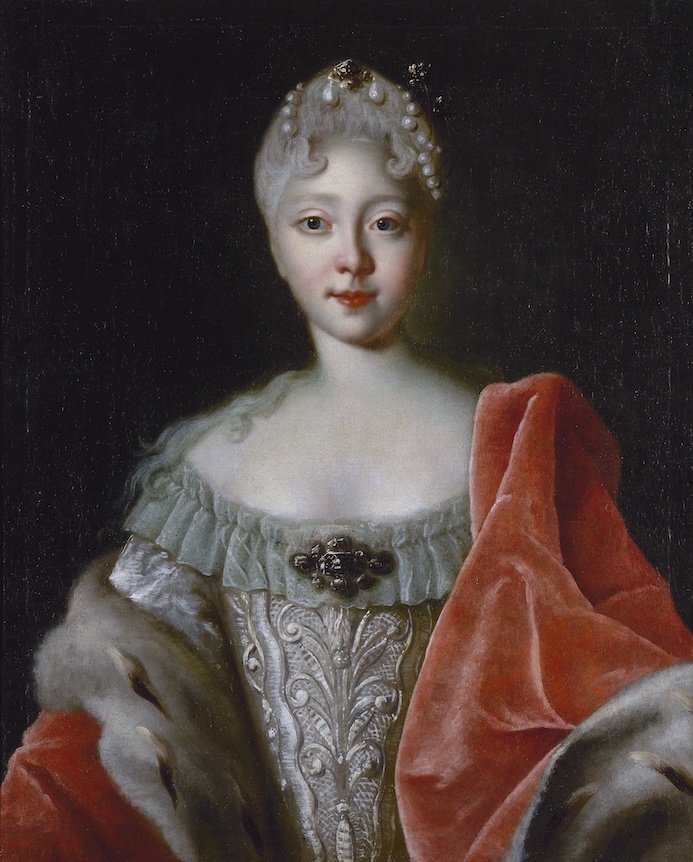 Determined to do things her own way, Elizabeth was a modern woman, even if her path was stony. Not even aged twenty, following her parents’ death, ‘Europe’s most lovely Princess’ – Louis Caravaque paints her looking like a young Marilyn Monroe, dewy-eyed and rosy-cheeked – found herself impecunious and isolated. Given the choice between a third-rate match  – when neither the marriage of her sister or her numerous cousins inspired much confidence in marital relations in her  – or to retreat to a nunnery, with a maimed and babbling hunchback dwarf as her sole company, Elizabeth did neither.

As for the historical background, the years following Peter the Great’s death set the stage for a brutal battle for the reign in Russia, a struggle for survival of an entire nation. The throne was orphaned three times in five years - a revolving door in these most complex times in the Russian history, which is rarely straightforward. The novel’s setting was like a loom a thousand strands strong, apt to weave a tapestry grand enough to fill the walls of the Winter Palace. Yet this historic background ought not weigh on the story, but make it float instead. The challenge equals doing a split. Like in the Olympic Games, the setting is the Rhythm Dance, the fleshing out of the character and the flow of a pacey, fresh story the Free Dance.

A wide variety of research and reading bridged past and present, allowing to attempt an answer to the question: What were things REALLY like, especially for women living in a brutal, male dominated world, which offered little prospect beyond annual childbirth? I did my homework, reading everything from the classics such as Gogol, Dostoevsky, and Tolstoy – to the point where a name without patronym looks bland to me! – to letters from foreign envoys at court and travel diaries of a 17th century merchant to fairy tales – invaluable for understanding a people’s imaginary lives – and, last but not least, tomes such as Prof. Lindsey Hughes’ Russia in the Age of Peter the Great. The details provide a non-negotiable framework: clothes, food, furniture, travel and the aspect of cities and town. I take liberties with the language, though: my heroines are not stuck in some weird period-drama, but are women of flesh and blood, who speak modern English. ‘Sod the caviar!’ Why ever not? Careful, though – a medieval brain cannot be ‘computing away’, as I recently read it.

During research, a writer WILL find the angle to reel a reader into his world and story. In his TED talk, the literary agent Jonny Geller says: ‘Readers are looking for a journey, from a place where they have not been, to a place they know not where...’ It should be the same for an author. In the case of The Tsarina’s Daughter, this was discovering the terrible price my heroine had to pay for seizing power in Russia.  Also, the rumours surrounding Elizabeth’s birthplace, Kolomenskoe Palace, were intriguing. It was said to be haunted by soothsaying, ill-willing spirits and rumoured to be a gate to time travel. How seductive to provide my heroine with a Delphic prophecy, which accompanies her life like a choker of dark pearls; guidance, and warning in one.

Finding my leading ladies, who like Tut-Ankh-Amun were hiding in plain view of other historical fiction authors, might have been an unbelievable stroke of luck; I prefer to think that they were waiting for me. Germans and Russians share a millennial history (My father grew up in the GDR) and they lived as raw and fearless as I would like my writing to be. Despite hooped skirts, candle-light and carriage drives, both Tsarina and The Tsarina’s Daughter are thoroughly modern novels. My heroines breathe with their hearts, surviving wars, vicious female jealousies, and callous court intrigues of the highest order, making for a marriage of dreams of fact and fiction and a sweeping epic cloaked in ice and snow.

The Tsarina's Daughter by Ellen Alpstein is published by Bloomsbury

Read more about how to write historical fiction, with advice from leading author Alison Weir.