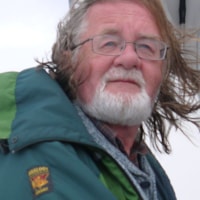 There Is A Green Hill

David Jackson is an ex-civil servant, management consultant and academic. Born in Lancashire, his working life began as an apprentice in an engineering factory on the edge of the Lincolnshire Fens and later included spells in Sweden, France, Nigeria and Morocco. He now lives back in Lancashire, in Bolton. On taking early retirement nearly ten years ago, he completed an OU BA in an eclectic mix of Mathematics, Creative Writing and Psychology. Since then he has concentrated on writing short stories and poetry. He tries to write stories based in some kind of reality, but which hinge on the question ‘what if’ some factor whether important or trivial had been different. He finds entering competitions provides him with a subject to focus on and a deadline to meet, which gives him the impetus to complete each project. He has also collaborated with his son, Rob, a graphic artist and illustrator, on a light-hearted attempt at family history (The Storytellers) and a look at life on an allotment site entitled Tales from the Plots.

There Is A Green Hill By David Jackson

It’s been forty minutes since we’ve passed any habitation.
Our white Mercedes slows to a halt at a crossing over a single track railway. In the moonlight, the rails form two parallel lines of silver disappearing into the endless desert.
A jackal, or maybe just a starving dog, slinks by.
‘Are we nearly there yet?’ I ask Aziz, sounding like a querulous child on an outing to a safari park.
‘Long way,’ he grunts.
We bump across the rail tracks and continue our journey. Slumped in the back seat I think ‘How the hell did I get into this? I don’t know where we are or where we’re going.’

A sense of foreboding permeates There Is A Green Hill, David Jackson's runner-up in our Travel Narrative competitition, to hugely atmospheric effect. Robert Eldon (or Eldon Robert as his driver calls him - another careful detail that emphasises how ill-at-ease this character feels in his surroundings) is a narrator giving off a fritz of anxiety that transfits itself effectively to the reader. Nothing is spelled out but the mounting sense of discomfort is palable throughout this story of a trip into the unknown that reaches its climax with the information – which in this context where everything seems sinister can only be received by Robert with alarm  that 'our Patron is not keen on Americans'. Physical unease is used to create the impression that Robert has travelled off the map into a place with a different, and dangerous moral compass.

Nothing is made obvious in David's storytelling but from the beginning There Is A Green Hill creates a taut sense of unease: out in the middle of nowhere, endless desert, Robert way out of his comfort zone, deplaced into an environment where everything is unfamiliar. Names, places, even the time of arrival all add up to create an overwhelming impression that everything is skewed and unwelcoming. It's very well done on David's part, with the reference to the childhood hymn at the end and in the title giving the suggestion that Robert's excursion is into the dark heart of something sinister and even unholy, with what is good and familiar left very far behind.