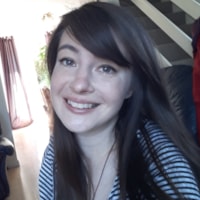 The House with the Blue Door

Sarah Turner lives in Essex where she works as an English teacher. She's always enjoyed writing but it's only recently that she's begun to dedicate time to it. This is her first entry to Writing Magazine so she's absolutely delighted to have won - and thankful for a bit of beginner's luck! When not reading or writing she enjoys getting out in nature and playing the guitar too loudly.

The House with the Blue Door By Sarah Turner

Ours was the house with the blue front door. There was the back door we never opened, save on scorching hot summer days when you felt strange and new stepping through it. And of course there was that spot just under the alcove that caught the light in the afternoon, where nothing bad could ever happen.

The fringes of town were smoky, like paper burning and curling at the edges. The moon was creeping into the sky, translucent as a ghost. It was only 4.00 but the clocks had gone back. I would forget mine and wait for them to be right again in spring. Sour little faces walked past me, coming home from school with looks of injustice and impertinence that would all too soon vanish with age. 'Hold onto your rage,' I wanted to say. Whether it was about a stolen rubber or a cold dinner, hold on. One girl looked to the moon and smiled and it was a smile devoid of anything else and I knew she was happy because it was Friday and she was free.

They always left at the start of autumn. Like a promise.
"Yes, off to Spain again. And guess who's left feeding the cat?" Mrs Reed pursed her lips but I could tell she was pleased. I couldn't picture them in Spain; in yellow heat and yellow light, with towels next to their sunbeds and brown glass pooled at their eyes.
"Oh and did you know they got a new conservatory?"
I paused. "I didn't, no."
"Juts right out past my patio. Blocks the light in the morning, it does.”
“Oh dear.”
“We’ve just set those plants up on the table and as you can imagine it’s not helping them much!”
“Yes, of course.”
“Well..." and she pursed her lips again.
"Bye, Mrs Reed."
I never used to be able to stand her, the banal nattering about neighbours and the council and children daring to have fun but now her words brought permanence. She was like the birds chirping in my overgrown garden, or the trains pulling into the station, their screeches carrying on the wind as they shuddered to a halt. If she ever stopped a jarring silence would descend that no one could pin point or understand.

My lasagne whirled like a kid on a carousel and I stood waiting, a proud slightly impatient parent, as flashes of grins and flicks of tails swept by. It was 6.00. Which meant it was 5.00. That gave me another half hour perhaps? I pulled my curtains but didn't switch on the light. Instead I let the sunset flood through the cheap pink silk like dawn. People said that if you looked at a photo, you couldn't tell the difference between dawn and dusk but that was nonsense. If you stared closely enough you could see Apollo's arms begin to slacken on the reins and his golden head start to loll to one side as he plunged out of sight.

At 5.30 I left. My breath smoked like clouds and the street lamps illuminated tufts of browning trees. The moon was now bright and the stars fixed. There had always been something about this time of day; an unveiling, a necessary reminder after a day spent gazing at the dull blue sky as if at our reflection in water. It's why people were afraid of night time. They weren't afraid of the dark, they were afraid of what it would show them.

Mrs Reed was just pulling the door to, slippers on her feet, muttering slightly under her breath. A fox darted out from the shadow of the bins and I thought how nice it would be to join it; to claw down deep into the warm earth, fingers stretching like roots, and curl myself amongst striped fur and bright eyes and the bugs that would crawl and scuttle across my skin. I took the key from my pocket; solid, moulded, boiled down, its individual fragments glistening in the street light. I flicked my nail against it and it rang out, cool and tinny. This is the last time, I told myself.

"And these are the only keys you have, yes?" He held his clipboard aloft, his torso eclipsed.
"Yes." He made a tick as I handed them over. I heard it scrape the paper.

I kept my steps quiet as I walked down the drive, the smell of browning petals rising from the earth. The windows gaped at me, their thick net curtains like lace at a woman's throat. I put my hand on the door, dark blue in the night.
The hall stood in darkness and there was the quiet hum of a thousand possibilities rearranging themselves. As I flicked the switch light streamed along the pale pink ceiling and garish flowers, added last year, climbed the walls. The stairs rose as usual, teasing familiarity, but I never went up there.

I liked to sit in the living room. The fireplace had been taken out and over its absence hung a large TV. In the semi- darkness it was like early winter mornings with the hard crease of pretend grown up skirts and the plastic scent of dolls. The old alcove with its arching shadows and pillar-like edges had gone, a little temple filled in by smooth plaster.

"It's just a temperature, nothing to worry about." Mum's hand felt cool on my forehead. I secretly liked being ill because I got to drink Lucozade from the big bottle with gold foil lid. She would pour it out into a curved pink glass so that it looked like a potion and I would instantly feel better because I believed in it. I would sit, my head under the shelter of the alcove like some umbrella in a storm and flick through the big book of nature, folding down corners when I saw spotty frogs and colour-flecked birds.

Grey faces beamed from shelves with the burn of Costa del Sol, the pinched family nose bouncing from face to face like an echo. I traced my fingers along the walls until they reached the new door. The conservatory yawned in front of me, a gaping hole in reality, as if from one of those dreams where you discover a new room in your house and awaken disappointed but relieved to find that everything is solid and the same. It had taken the place of the rusty door we hardly ever used so that instead of coming out onto the patio, I found myself in a small glass church, the panels stretching to a point above me, the birds and the photos and the lights flickering in the glass. As I pressed my face up against it I could see the little apple tree like a statue in the moonlight.

"I just need a few photos of the garden." His voice was dry and flat like pressed flowers.
The late summer sun hit the back fence, turning it into a solid gold bar. The apple tree stood patiently, the grass around it pockmarked by fallen apples I had gathered up that morning. As the camera flashed I could feel my back against the soft bark, the smell of new school jumpers and a trembling smile.
"These will be up in a few days."
"Up on..?"
"The website.”
"Sorry, I've just never had to sort anything like this before."
"Sure. This your parent's house?"
"Yes."

In the hall Molly brushed past me, her chubby mass purring, black tail flicking round my legs. The key was warm in my palm with the metallic tang of a coin on a hot day.
"Hello Molly," I put my hand out but she had already begun climbing the stairs. My eyes stayed on her until she was engulfed by the darkness. I hesitated. I knew I must leave. I could hear movement upstairs and the shadows on the landing began to shift. I knew that if I went up there I could perhaps help mum sort the washing and as the clock turned 9.00 I could get into bed and sleep. But I had left my television on. And that report needed doing, yes. And I told myself that the lasagne would be getting cold. I put the key down on the little table by the phone, its slender body skeletal and shining against the dark wood. I wouldn't leave a note. They would just find it one day and assume it had fallen from the pocket of that old raincoat that they hadn't used in months, the one that only ventured outdoors in the sludge and the wet and so only knew a grey world. I turned away and shut the door. I knew that behind me something was moving towards the glass, waiting just the other side of the door that stood like a dark lake. My eyes ached and my heart lurched but I walked on without looking back, my eyes on the sky the whole way home.

The quality of writing made Sarah Turner's The House with the Blue Door a standout winner in Writing Magazine's open short story competition.

Past and present lives, loss and memories are all delivered in impressionic framents, evoking a state that is at once hazy and dreamlike, but studded with precisely conveyed evocations of the memories being recalled: The fringes of the town were smoky, like paper burning and curling at the edges. This is prose beautifully written with a poetic sensibility, where the words capture not just an image, but its deeper emotional resonances. There is a sense in The House with the Blue Door that the first-person narrator, at a point where they're preparing to leave, is haunted by the memories that so insistently bleed into the experience of their present that the past and present merge into one.

The story is also an object lesson in the significance of detail. The House with the Blue Door is a story conveyed in precise, finely rendered brushstrokes, with each detail awarded the care it deserves to reveal its emotional significance in the narrator's life. The everyday experiences that make up home life are brought to life, amplified so that they transcend mundanity and become extraordinary. It's a beautiful, resonant, carefully layered and textured piece of writing that immerses the reader and captures a sense of the immediacy of the narrator's thoughts, and shows that they have never been more strongly pulled to relive their past than the point at which they have to step away from it.