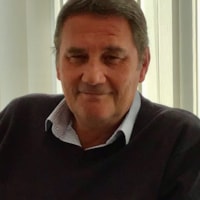 A Price to Pay

Tony lives in South Gloucestershire and writes primarily for the stage. He has award-winning plays published by Lazy Bee Scripts and his drama, Me & You, won the 2020 Avon One Act Festival competition. He has been shortlisted in two previous Writing Magazine competitions and says he’ll continue to chase that elusive first place!

A Price to Pay By Tony Domaille

Tension mounts with every line in A Price to Pay, the runner up in WM's competition for dialogue-only short stories. The conversation between James and his lawyer builds from a formal start, gradually revealing the circumstances behind the crime the youth is facing trial for.

Tony Domaille, the writer of A Price to Pay, has set out his story with control and restraint even though the circumstances of the story are grim, and lurid. It works like a successful script – each line acts as a beat, revealing another telling detail, allowing the reader to build up an incremental picture of the crime and the circumstances behind it.

Tony doesn't use formal speech marks to differentiate his two protagonists. He doesn't need to because the characters, and voices, that he's created are so distinctive. It's always possible to tell who is speaking without it having to be signposted - this shows just how effective this piece of writing is.

The taut understatement of the conversation, revealing a horrible crime in a matter-of fact way, adds to the grit of the piece as it builds to a reveal in a final line that has been skilfully timed for dramatic effect.