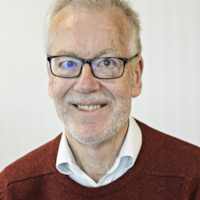 David Stephens lives for eight months of the year in Lima, Peru, and the remainder in Brighton, where he works part-time as a university professor. Not wanting to spend his days in Lima tied to the desk, he set up the Lima Writers Group which is now flourishing. His first novel was a campus satire, Purely Academic, published by Arena Books and he is working on a cycle of interlinked stories, Acts of Disappearance, set in Peru and focusing on the missing and the disappeared. It also draws inspiration from South American writers’ use of magical realism.

Take a left past the abandoned post office and at the end of the track next to Vanner Lake you’ll find old Nielsen’s place. They say he built it with his own hands to please his new wife Charlotte, felled the trees himself whilst she created a vegetable garden that would become the envy of the locality. Not that these folks had much time for envy, being more interested in hard work, the church on the hill, and a strong but quietly expressed sense of belonging.
Since ’84 when Lotte had gone, he’d done the respectable thing: mourned her quietly and privately, not looked for a new partner, and had taken a dog, some said for company, but he’d said for the wolves that were moving south from Finnmark.
Nielsen was not old but of an indeterminate age somewhere between manhood and elderly, his face still possessed of a youthful eagerness mixed with lines of experience his wife had found so attractive way back when she kept a small grocery store and he a hardware shop opposite. Once modernity in the guise of the supermarket had arrived, Nielsen and Charlotte had sold up, the corporate lawyers of the new business offering them a princely sum to just close up the stores and move on.
So, they’d bought Mikkleson’s place up by the lake and made it a home.
Charlotte, who was good at mathematics and keeping accounts, soon found her services in much demand from the small businesses generated by the supermarket: advertising, landscape gardening, even a small car-wash franchise established at the back of the new car park. And he’d developed a skill in carpentry, instead of selling nuts and bolts and stocking shelves he found he could now make them, turning his hand to running up a chicken coop, making children’s playthings for the small school next to the church, even crafting a wooden weather vane for the church on the hill.
And then Lotte had caught that damned cough, which had gone from bad to worse, and one winter’s evening had taken her from him. Now, in the summer, when the evenings were long and you could sit down by the lake and think, Nielsen would cluck at his dog and wander down to the water where he could watch the Canada geese soaring away in close formation.
It was on such an evening, as he sat and thought of his wife, that he experienced what the reverend would have called a miracle. He saw Charlotte, not walking like some hallucinatory apparition across the water, but standing in front of him on a small hummock ten or so yards from the shore.
She was looking directly at him but saying nothing at all. The dog – he’d never named her – was looking alert, the bristles on her neck rising, the starting of a growl from the back of her throat.
‘Lotte is that you?’, he said quietly but loud enough for her to hear.
She gave no reply but smiled, an expression he remembered from their first meeting when she’d persuaded him to take to the floor and try a waltz.
‘Lotte, it’s me Nielsen, can you hear me?’ The dog looked quickly towards its master and then back towards the woman.
She was wearing a white, almost diaphanous dress, a dash of colour provided by a single blood-red rose fastened to her grey hair which was pulled back from her head into a bun. He’d never seen her wear it any other way.
‘Lotte, it’s me, Nielsen. What do you want? What can I do? Lotte it’s me.’
The dog growled. Lotte leaned forward and spoke quietly to her husband, her voice hushed, almost lost amidst the gentle lapping of the water. Nielsen stood up and gently walked towards his wife.
Mikkleson’s son found him later, washed down from the house, and still in sight of the small hummock twenty or so yards from the shore. He was lying face up; his eyes open as if he had seen something wondrous like a flock of wintering geese in flight towards the nesting grounds in Canada.
Lying quietly next to Nielsen was the dog, waiting loyally, knowing what was expected, making no fuss. And in the old man’s hand was a flower, a blood-red rose, picked from a garden, and pressed tightly to his heart.

Within a mere 750 words – a single page – David Stephens takes the reader on a moving, profound story in the otherworldly Blood Red, the winning entry in our 750-word competition.

The first impression of Blood Red is that it evokes a world of everyday normality before the turn and the story's beautifully understated magic-realist ending. But that impression is entirely deceptive. David has placed the ordinariness of a world of supermarkets and routine in a frame that suggests that Lotte and Neilsen live near, but are not of, the everyday world. There are gentle hints that David's fictional landscape is a realm of the imagination where things might happen that seem inexplicable if measured by rational real-world logic. Neilsen and Lotte live near, but outside, the rest of the community. There's the mention of wolves, and the place they come from: Finmark. The otherworldly and the everyday are mingled subtly and carefully but the details of corporate lawyers and supermarkets are a thin layer of normality veiled by the nuanced sense of strangeness that permeates David's storytelling in Blood Red. The way he renders this strange layer almost – but not quite – invisible is beautifully done.

Within the brief 750-word limit, David has also telescoped time, compressing and conveying whole lives, and a life-long love, again by thoughtful, understated use of precise, carefully chosen details. This is a story deliberately given a muted tonal quality so that the strangeness of what's being conveyed creeps up on the reader – there's nothing sensational in the appearance of Lotte. Kept under wraps right until the end, the blaze of colour in the red rose pressed to Nielsen's heart (the story's symbol not just of love but of magic) has the thrilling, unexpected effect it needs to create the story's beautifully-rendered climax.