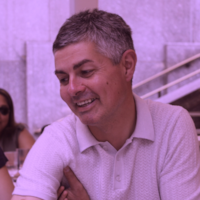 The things that disappear

Justin currently lives with his family in Suffolk. He attended a newspaper journalism course about a hundred years ago and has also completed several creative writing courses. Justin joined the Felixstowe Scribblers earlier this year – a local writing group which has reignited his passion for writing short stories. Justin has previously been shortlisted in the Flash 500 competition and his work has been included in an anthology. He is currently working upon a short story collection entitled Sign Language. The theme of each story revolves around the name of a road sign.

The things that disappear By Justin Keogh

My little scarecrow is in the vegetable patch again.  A familiar figure in a ripped school blazer, dragged over a grubby dressing gown; wearing too-big yellow washing up gloves and white plastic sandals. As usual, she’s dragging a bulging plastic bag behind her. She carefully kneels down, rolls up her sleeves and frowns. Perhaps preparing to perform an intricate operation or conduct an
invisible orchestra.

Only she isn’t brandishing a scalpel or a baton. It’s a child’s blue plastic trowel. Afterwards, the only evidence remaining will be a mound of earth behind the wilting runner beans.

Things started to go missing about three years ago. Or maybe, that’s just when I had the time to notice.

My car keys went first, Peter’s Oxford University tie a few days later. Quickly followed by a paperweight, cheese grater and one slipper. These were discovered weeks later under her Disney Princess bed, rammed into a plastic Fortnum & Mason bag.

I decided to place the exhibits on the dining table garnished with a piece of paper displaying the words ‘Found Property’. She put her school satchel down and stared straight ahead; whilst simultaneously trying to swallow down a nervous smile. There were all the usual questions. Was she angry? Cry for help? Was she unhappy at school? She shook her head and looked down at her scuffed shoes as if they were the most interesting things in the world. Is it pizza for dinner? she asked.

I didn’t tell Peter straight away because I dreaded receiving the raised eyebrows and constipated look that he’d perfected. I suppose we should be grateful she’s not lighting fires or harming small animals yet, he said later.

But my paranoid thoughts were back again on repeat. Like an irritating tune that you can’t stop humming.  I began spending every morning forensically examining her bedroom.

A week later I’d walked her straight back into the local supermarket to apologise. People steering trolleys tried not to stare, as I squatted down and squeezed her jacket pockets and patted down her skirt. A red-faced bouncer, wearing a flowery skirt and a Barbour jacket.

The trainee store manager had not really known what to say but reluctantly agreed not to ring the police. In the car, I’d patiently explained that shop theft wasn’t a victimless crime. How can I hurt anyone with a Scotch Egg? She’d whispered to nobody in particular.

It was only a matter of time before things began disappearing at school. The head teacher talked about permanent exclusion and how this type of criminality might indicate a deviant personality. I spent most of the meeting looking at a spot just over her left shoulder and nervously nodding in some of the wrong places. I wondered how she had smuggled the cello out of the school hall
unnoticed and onto the school bus.

After that the invites to birthday parties dried up; replaced with knowing glances and uncomfortable silences. A few of the parents requested that their children sit somewhere else in the class. Like it was contagious.

The specialists can’t find evidence of a psychological disorder or tell us when it’s going to stop. Apparently, we’ll just have to wait until the neurotransmitters controlling her impulses change. We’ve tried tablets but stopped when her eczema flared up. Talking therapy helped until we were asked to leave the group when a mobile phone went missing.

We’ve experimented with hugs, pleas and consequences. Regularly confiscating her TV, iPod and computer and locking them in the garage. Sewing up the pockets on her skirts, coats and cardigans didn’t work either. So I’ve resorted to keeping a secret spreadsheet listing her legitimate belongings to cross-reference against.

I’m not sure when or why she began her burial ritual. She won’t tell me. And I’ve stopped asking. Maybe she’s feeling guilty but I’m far from an expert. I’m just another bewildered mother with dirty fingernails, resurrecting the things that disappear.

Justin Keogh uses the 750 words available to him in the runner-up story The things that disappear to convey a mother's bewilderment at the actions of her kleptomaniac child with a haunting, almost lyrical eloquence. The focus is tight, concentrating on telling details of things taken and markers of the condition's progression, but underlaid with a palpable sense of the mother's emotional state and even the strain that the daughter's baffling condition is placing on her relationship with her husband.

There's a colloquial effect in the short sentences and the peppering of sentences that are incomplete or gramatically incorrect. The frequent use of present participles generates a sense that this is a continuous state of affairs. Voice is used particualrly well in this story. We see everything through the eyes of the narrator and it's clear and convincingly conveyed. There's arresting imagery, and well-chosen language that conjures emotional as well as descriptive impressions: My little scarecrow is in the vegetable patch again/How can I hurt anyone with a Scotch egg?

Most impressively, Justin doesn't attempt to resolve the situation or impose a neat or unrealistic storyline on the baffling scenario he's presenting. Instead, there's a controlled circularity whereby the ending of the story brings us back to the garden of the beginning - only by now, as readers, what we know has been changed – we have been given a much deeper understanding of the 'burial' scenario, and thanks to the way Justin has carefully structured his narrative, we're aware that this is a narrative that has to loop, round and round, without the possibility of resolution.