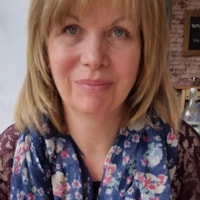 Carey Powell lives in the north west of England where her day-to-day life is taken up by her part-time job as a physio, her husband, four ‘adult’ children, running/jogging and of course, writing. She writes poetry, short stories, has a novel ongoing and another tucked away on a memory stick. Apart from the odd lengthy ‘tidy your bedroom’ text, this is her first venture into writing for children.

Virtually the Same By Carey Powell

Carey Powell's winning entry Virtually the Same delivers a well-observed, funny story for younger readers with an endearing narrator and a fine act of poetic justice involving worms for a climax that couldn't fail to appeal to children fascinated by things that are slimy, wriggly and unpleasant.

The theme for our Writing for Children competition was 'equality', and as her story's title suggests, Carey tackles the issue of equality in the classroom with warmth and wit. Her classroom is divided into groups who are all supposed to be the equal, but inevitably there are personalities who influence the group dynamics and create the satisfying, classroom-sized drama in the story. Daniel thinks being cool gives him the right to mock other people. Lily is clever and has different food from other people. Ethan, the hero of the piece, has behavioural issues and a strong senses of right and wrong when Lily, his 'Special Buddy' is the target of Daniel's unkind practical joke. The interaction between these three core characters as Daniel tries to exploit Lily's weak spot and Ethan, her protector, takes appropriate action, creates enough energy and action to fuel a satisfying scenario. Carey brings each character to life in a few neat brushstrokes via the observations of her unnamed, but very distinctive narrator, whose voice gives Virtually the Same its winning edge.

Although this is a story that younger readers would definitely read and enjoy, the age-appropriate treatment of justice being served via Ethan's worm-wielding heroics is not the only humour. Readers of all ages will respond to the the narrator's voice, which, speaking directly to the reader, is original and full of humorous insight. They come across as a lively observer with a keen eye for the foibles of human nature, in adults as well as children, and their perspective embeds layers of extra sparkle to a story that is kind, lively, fresh and funny.