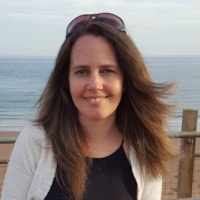 Tara Girvan lives in Leicestershire and particularly enjoys writing for children. She has two daughters who are her number one fans and she is currently working on several stories for younger readers. After being shortlisted in the WM Writing For Children Competition last year she is delighted with achieving second place this year. When not writing, Tara enjoys taking long country walks, martial arts training and occasionally rekindling her love of playing the piano.

It's Not Fair By Tara Girvan

It's Not Fair, the runner up in our competition for equality-themed stories for children, is a charming tale about two dogs who are best friends. One, Burt, is big, and the other, Sausage, is small. Through simple scenarios aimed at early readers, Tara shows how easy it is for Burt to do things like stealing food and climbing on the sofa that Sausage can't manage because he's only got little legs. It's a comic set-up that is fraught with pathos, and rather than exploit its potential for slapstick Tara does a lovely job of showing how Burt, taking his strength and agility for granted, doesn't realise that Sausage is unhappy. When he does, in this kind story with its gentle message about looking out for your friends, he changes his approach, and goes out of his way to think about how to do things so that Sausage can join in.

Tara hits just the right note in the way she tackles inclusivity in It's Not Fair. Her young readers will warm to her characters and understand Sausage's plight (he's small and so are they, so it's not a great leap of imagination) but they are being told a kind-hearted story with an ending that might inspire them to consider how friends can accommodate each others' differences rather than being preached at. A very nice note is that Burt's life is fuller when he's adapted things so that Sausage can join in, because doing things together makes life better for both of them.

The language the story is told in is clear and simple and it's easy to conjure the images Tara creates: it doesnt take any stretch of the imagination to 'see' how it might be illustrated. Although this particular message is neatly wrapped up in It's Not Fair, it's easy to imagine that Sausage and Burt could be recurring characters in equally visual and endearing stories featuring further adventures of this very appealing pair of friends.