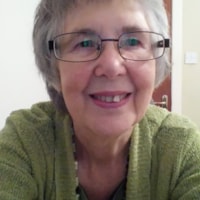 Having a break from her hobby of art quilting, but not bridge, about which she remains obsessed, Pat took up short story writing a while ago and aims to emulate the humour and writing of her son James and the empathy of her son Alan. She lives with her husband of nearly fifty years, who is her kindest critic.

A Bedtime Story By Patricia Marson

Character and voice are inseparable in fiction writing. A Bedtime Story, Patricia Marson's winning entry in our competition for character-driven short stories, is an affecting and entirely believable first-person narrative written in the voice of Julie, a ten-year old in foster care.

It's beautifully done. There is no hint of an authorial voice whatsover - Julie's first-person narrative is the whole story, and we not only see her world entirely through her eyes, but are enabled to see what sort of a person she is and the relationship between her character and her circumstances.

From the opening line, Julie's voice comes through clearly. She is such a believable character, and an endearing one too - raw, direct, funny, loving and loyal. The way Patricia has created her on the page, showing her world through her eyes, enables readers to respond to the difficult circumstances of her life with understanding and empathy - we see Julie as a person with nuanced, understandable responses, rather than as a 'case study' or someone whose life issues are given more narrative space than her character. Patricia's compassionate delivery of Julie means that readers 'see' her first, which means that we understand her life circumstances in the context of empathy.

Patricia has written A Bedtime Story with a delicate touch, weaving acute observations and humour into her harrowing storylines. Because of the way the author has prioritised her character and her voice, the story has a memorable impact, and loving, troubled Julie is a character who fully deserves her place at the top of the winners' pile for this competition.