Without short story competition - Runner Up 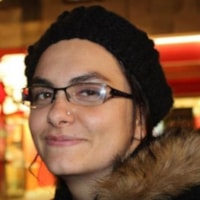 Lolita is a French native living in the UK for the past ten years. She's a mother of two and works in a library. She writes fantasy fiction and paints in her spare time. In a life where we live fast, she wants to read books where heroes (males and females) are not perfect and take time to learn to become better. She's still working on her first novel and hopes to publish it this year or next.

Lolita Parekh's Sky Fish, the runner up in our Without Short Story competition, paints a dreamlike picture of the bond between two damaged characters. He is scarred and full of fear; she is blind. He describes to her the world he can see; she is filled with light and makes him feel normal. It's a quirkily graceful, imaginative story shot through with surreal touches and permeated with gentle compassion.

The two oddball characters are drawn with a complex charm. They're multi-faceted and full of imperfections, existing in circumstances that are painful and sad, but their relationship is sustaining and affirmative: it allows each of them to feel, and be, accepted. The dancing sky fish - strange to him - are just part of her world view, and because of the simple, matter-of-fact way that Lolitia conveys this, we, as readers, embrace the oddity and strangeness of this offbeat story and are enabled to see the beauty she depicts for what it is.

In its delicate, magical way, Sky Fish obliquely asks questions about difference, acceptance and tolerance. Even 'without' her smile the blind girl is radiant and when the two characters are together, nothing is missing anymore. It's a beautiful, idiosyncratic story whose originality made it stand out in this competition.