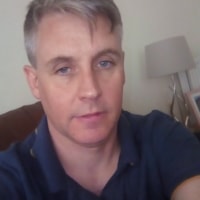 Gareth Bicknell lives in Llandudno with his wife Sara and their three children. He enjoys days out with family in the beautiful North Wales countryside, as well as running, writing and rock music. This is the first competition he has entered, so he is thrilled to have won. Other recent achievements include being taught by his 11-year-old son to play the guitar riffs to Black Sabbath's Iron Man, Led Zeppelin's Kashmir and Blitzkrieg Bop by The Ramones. Gareth works night shifts as a journalist and rarely gets enough sleep.

The Hero Unmasked By Gareth Bicknell

Hope settled onto the sofa, baby Tommy in her arms, and stifled a cough as he started to suck greedily from the bottle.

She could relax now his crying had stopped, the aches in her muscles beginning to relent after an exhausting 16-hour shift.

Hope looked up at the blurry screen across the room. Her eyes, still stinging, made out the domineering image of the Prime Minister. Maurice Bronson was addressing the nation.

“The virus has been defeated,” said the Churchillian figure, his blonde hair flowing in the wind over broad shoulders and a thick-set frame.

He was delivering his victory speech from outside No10, no doubt symbolic that the battle had been won and the outside world had been reclaimed. “While we all have borne the cost, we can be proud of our efforts and our sacrifices.

“And now we must keep faith in the measures we have put in place so the disease can be eradicated for good.”

Hope turned down the sound, and listened instead to the contented sucking noises squeezing out from Tommy’s cheeks. She felt the cough rising again in her throat, and forced it back down, her eyes watering.

Of course, the virus hadn’t been completely vanquished. The death toll was still rising, although much slower than it had previously.

But the election was looming, and Bronson was looking his best. Tanned, his white teeth glowing, he was the hero who had led the war on the pandemic.

He hadn't looked or sounded like that in the hospital – not the second time, anyway.

Hope had seen him the first time when he was touring the wards, shaking hands with victims of the virus. The second time, he was rushed into her ward on a trolley, hair stuck with sweat to his ghostly pale skin as he coughed up a cacophony in the corridors.

When she saw him then, he wasn't Maurice Bronson. He wasn’t the man whose colleagues had voted against a pay rise for nurses like her across the country. He was simply a patient who needed her care. She would put on the mask and gown paid for by a local charity, she would scrub her hands clean, she would administer his medicine, she would change his bed pan and she would do her best to get him through this.

Hope felt the cough rising again, and as she forced it back down inside her she felt the unpleasant warmth of sweat breaking out on her brow.

She looked down at Tommy - and saw her mum in his twinkling eyes and little round nose.

If only Mum could see him now, she thought, tears gathering in her eyes. For 40 years Mum had worked as a hospital cleaner, but after Dad died in the first pandemic 10 years ago, retirement was soon followed by dementia. Hope hadn't even been allowed to visit her when the virus had struck the care home. Mum never got to meet her first grandchild.

Hope looked up at the screen as the first tear fell. Bronson was giving one last triumphant smile.

She felt her throat tightening again, the cough trying to force itself out. She’d ask about that test tomorrow.

Also shortlisted in the Heroes Timely Topic competition were: