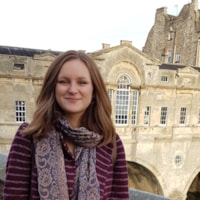 Jenny Morris lives in Crowborough, the home of Winnie the Pooh and an outrageous number of charity shops. She is currently finishing her PhD in Psychology and writing her first novel on the Faber Academy six-month writing a novel course. When not reading or writing speculative fiction, Jenny enjoys riding around the forest and playing video games.

The key question in speculative fiction is 'what if?' It's satisfyingly explored in Jenny Morris's Siphons, where question is 'what if a person had the ability to predict death and transfer the person's remaining years to somone else?' In Siphons the narrator has the disturbing power not only to know when the people she meets will die, but to transfer their life-force to more deserving cases.

The set-up immediately puts the reader on the side of the narrator: we see everything through her eyes but as readers, can also see through the wider perspective that Jenny provides. From the narrator's point of view, she looking out for her friends, and measuring whether it's worth her using her powers. Dr Macali has behaved badly, and wrongly, but his misdemeanor doesn't merit death. But when 23-year old Sophie is diagnosed with a life-threatening condition, she knows she can find someone more deserving: someone who has committed appalling crimes against the young women he kidnapped.

Although the Jenny' s viewpoint character assumes the role of an avenging angel, looking for a suitably evil victim so she can prolong the life of her good, deserving friend Sophie, she ends up testing her power not on the kidnapper but on an unpleasant old man. But the reader can see that's all he is: old and unpleasant. Not evil. But his death is pivotal as the narrator gets 18 months for Sophie and a taste of what she can do.

This testing of her powers is well-paced in the story and presented in the context of a victory. The next move, which is to track down someone else to prolong Sophie's life, is where the unease and tension suggested by the old man's death are ratched up again. The narrator's next victim isn't the kidnapper, but his wife. She may or may not be guilty of sharing her husband's crimes but the narrator believes in her own ability that tells her the women is guilty rather than search for evidence.

Jenny puts all the elements of her narrative in place and then allows the reader to create their own impression of the ominous potential of the narrator's power. By the end, with the narrator again deciding to exert her ability, the implication is that power, even when ostensibly being used for good, exerts its own seductive hold over the person who possesses it. It's an intruiging, thought-provoking tale, well-set up and excellently executed, that makes for a very worthy winner.