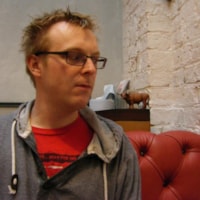 Damien Mckeating was born and a short time after that he developed a love of fantasy and the supernatural. He has short stories included in different anthologies, ranging from modern takes on Irish mythology to SF adventures for young readers. He is fond of corvids, writes daily, and is currently the oldest he has ever been.

On an Adventure By Damien Mckeating

On an Adventure, the runner-up in WM's competition for journey-themed short stories, shows that you don't need to go far to have wildly exciting adventures. In Damien Mckeating's story, the quirky, unpatronising narrative turns a walk into the countryside into a fantastical odyssey populated with witches, trolls, mermaids and dragons. This is a lovely story about the power of the imagination to transform and transcend the everyday.

Writing from a child's perspective runs the risk of the writer sounding twee, patronising or out of touch, but On an Adventure avoids all these pitfalls. The narrator's voice is fresh and convincing, and their observations, which flit between the real world and the world of their imagination, are funny and vividly conveyed. The imaginative journey Damien's narrator takes remains grounded in the everyday, and it's quite clear that the two worlds happily co-exist.

This is a story that would work equally well for a young reader or an adult one. There are lovely touches, like the 'flert-witch', that play with the differences in perception between child and adult, but Damien's greatest achievement in this story is allowing his reader to see and understand the adventure through the eyes of his narrator, and see how the imagination transforms the "nothing" the narrator tells their mother they've been doing into an incredible adventure without them going far from home.