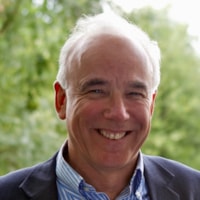 Kevin Cheeseman lives in Haddenham, Buckinghamshire, with his wife, Annie. He’s a retired biochemist who spent half his career in academic research and the other half in drug development for a big pharmaceutical company. He writes short stories and flash fiction and feels liberated now that he’s allowed to just make stuff up.

Burnt Sugar, the runner-up in WM's competition for food-themed short stories, is a witty, sophisticated soufflé of a story, whose apparent lightness conceals careful crafting and attention to detail on the part of its author, Kevin Cheeseman.

The conceit in this worldly, kindly story is a restaurant critic taking his mistress to review a restaurant. The menu choices and their dialogue show without telling the state of their relationship; the interspersed fragments of the critic's review allows a reading of another layer of the food critic's emotional life.

It's an elegant rom-com of a tale; slightly mannered in a way that shows Kevin casting an amused satirical glance in the direction of pompous restaurant reviews, and with a kindly insight into the foibles of human nature and the way tiny cracks in a relationship can be revealed by something as apparently insignificant an imperfect topping on a creme brulée. Amusing and humane, Kevin's Burnt Sugar is a delicious confection to present to a reader.