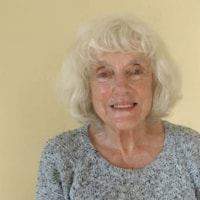 All Of Us Here

Joy Wodhams has been writing stories since she was seven years old. Several decades later she became a magazine editor,  writing mainly features. A few decades further on she turned to novel writing, and in her seventies has written and self published twelve novels for adults, children and teens, all available on Amazon. She also teaches creative writing and (prior to lockdown) hosted two writing groups. She blogs at http://joywodhams.blogspot.com.

All Of Us Here By Joy Wodhams

The central theme of Joy Wodham's story All Of Us Here, the winner in our first line competition, is all contained in that first line: They weren't like me.

Unlike her dynamic sisters, the narrator Chrissie has never left home. Never escaped her dreadful father, never managed to shed the yoke that 'home' had become. It's a story of understated desperation, finely and acutely observed, building the reader's hopes that after the funeral, Chrissie will be able to have a life of her own, just like her sisters did.

It's a thoughtful, wisftful, meticulously detailed story. Nothing dramatic happens: the drama is over, brought to an end by the death of the tyrannical father. It's about the limbo period between life phases. Joy allows her reader to hope that it might be about possibility. But subtly, she signals  othersise. The absentee sisters' avarice is conveyed with such fine precision: 'Well, there are four of us, Chrissie.' The arid life Chrissie is lived is subtly conveyed: for a while I got Christmas cards. The devastating silence when Chrissie asks if any of her sisters would put her up speaks volumes. The fine brushstrokes build into a picture that suggests Chrissie has been bereft long before the funeral.

The first line carries within it the story's end. When the reader learns that Chrissie has been squirrelling money, we hope with her that she will finally be able to find a new life. But as the first line indicates, Chrissie is not like the others, and as the understated last lines make the difference between them clear, Joy Wodhams brings her story to its quietly devastating conclusion.