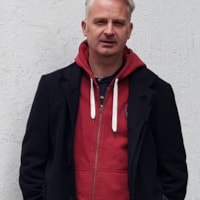 Andrew French was shortlisted for the 2019 Big Issue/Avon, HarperCollins crime-writing competition. He made the shortlist for Strands Publishers Water anthology and was shortlisted for Eyelands 7th International Short Story Contest. He has twice been a winner and three times a runner-up in Writing Magazine's competitions. When not writing or reading he rides a bike a lot.

Andrew French has taken the first line requirement for this competition as the title of his piece, and amplified it so that the 'they' the narrator is at odds with are the inhabitants of an entire planet.

It's an exit narrative that hinges on the creation of the narrator, and Andrew has succeeded in constructing an intriguingly layered character: angry, sensitive, craving the reallness he associates with Earth even though he's never been there. He's increasingly at odds with life on Raylan, the planet where he was born after his parents left Earth, and determined to leave. He hates the 'fake' air that is all he's ever known, the climate, the horrible reality behind the image of an inhabitable planet. He is flawed and angry but he craves authenticity – the leather bag – and possesses kindness towards his fellow creatures, giving the famished dog not just his sandwich, but company and empathy. He is idealistic, prepared to leave everything behind to follow a dream. He makes the reader care about why he's not like 'them'.

Andrew paints a convincingly bleak portrait of his dystopia: it's easy for the reader to understand why the narrator wants to leave, even though the place where he's going, Earth, is, in this spec-fic story, a destroyed planet that is no improvement on the one he's leaving behind. The twist in the tale is the way the final line, after the story has shifted from a first-person account of a misfit to a third person point of view of the Raylan officials, effectively echoes the first one to show why he would not thrive on Raylan: He's not like us.