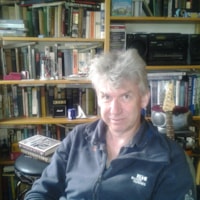 Dominic Bell is an oil rig worker from Hull, East Yorkshire, and writes as a break from either staring at the sea off Norway or looking after three teenagers in his time off. His main writing project is endlessly editing a series of First World War novels, the number of which increase by one annually due to NaNoWriMo. He tries to enter almost all the WM short story competitions to diversify his writing and have the satisfaction of actually finishing something. This is his fourth WM win. He recently had a short story, The Despoilers, published in Fantastic Books’ Fire and Ice anthology, The Forge.

Statement From Norsk Shell / Equnior Joint Statement on Ormen Lange Incident
At 09:45 NST on the 14th June 2020 at Nyhamna processing plant a low pressure alarm was noted on both of the twin gas pipelines that bring gas onshore from the Ormen Lange field, north-west of Trondheim. Simultaneously data communication was lost with the four seabed templates, each comprising six production wellheads, that form the field. Norsk Shell and Equinor Serious Incident Teams were immediately alerted. A shutdown of the pipelines at their Nyhamma termini was successfully carried out while troubleshooting procedures were initiated, but data links with the subsea templates could not be restored. At 10:36 communication was lost with the Nyhamma processing plant itself and was not regained.

10:05 NST 14th June 2020 Radio Transcript from Scarebeo 13 semi-submersible drilling rig:
‘MAYDAY, MAYDAY, MAYDAY. This is semi-submersible drilling rig Scarebeo 13, I repeat Scarebeo 5, call sign C6AD7. I say again MAYDAY, this is drilling rig Scarebeo 13, on location Ormen Lange gas field. We are experiencing a large gas flow from the sea floor and are losing buoyancy. Attempt to move off location unsuccessful due to gas causing propeller cavitation. Rig is continuing to lose buoyancy. Request immediate helicopter evacuation. 110 personnel on board. I repeat, MAYDAY, MAYDAY -’
[At this point the transmission stopped and did not resume. Multiple emergency beacons were briefly detected before these transmissions also ceased.]

10:45 NST 14th June 2020 Radio transcript from Helicopter Service flight HKS 642 en route from Kristin field to Scarebeo 13 in response to emergency call.
‘Arrived at last reported location of Scarebeo 13, but we see no sign of rig or of life capsules. Sea apparently boiling in four locations, which we suspect is due to escaping gas. We are staying above 500 metres for fear of our engines igniting possible gas cloud. We are continuing to search for survivors.’
10:30 NST 14 June 2020 Transcript from Norwegian news service TV2 (translated)
Helge Askeland: That looks absolutely delicious, and -
Inge Stromenes (presenter): ‘Sorry to interrupt you, Helge, but I have just been told to tell everyone watching that sea levels are expected to rise rapidly along the western coast of Norway. Everyone near the coast should immediately go to a high building or move on to higher ground as soon as possible, or if that is not possible, to as high as possible in the building that they are in.’
Helge Askeland: That sounds like a tsunami warning?!
Inge Stromenes: Yes, it does – do we know any more about this?

10:35 NST 14th June 2020 Transcript of radio transmission from police car on seafront at Alesund, central Norway.
‘We are seeing water receding from the harbour. [sound of his partner urging people to move away from the shore in background] I am now seeing a – it is not a wave, it is a wall of water coming. Get in Jan! [sound of engine starting] We are heading away from the coast, a lot of confusion, people running. My partner says the wave height is still increasing. [calls to go faster, engine revs]
At this point there was confused noise and the transmission was lost]

10:40 NST 14th June 2020 Transcript of emergency call from Sukkertoppen, a hill above Alesund.
‘Oh my God, I don’t know what has happened but the sea just rose and Alsund has just gone. It’s just gone. Oh my God, it’s just gone..’
‘When you say its just gone, you mean -’
‘It’s gone. The sea just rose. It’s all underwater, it’s all gone. I can’t see any buildings sticking out even, just the other hills. It is like we are on an island or something. Everything’s just gone.’

09:45 BST 14th June 2020 Transcript from the BBC, transmitted on all television channels:
‘We are getting reports of very large waves hitting along the Norwegian coast. As a result the government is advising people in the Shetlands, the Orkneys, along the northern and eastern coasts of Scotland and along the coast of north-east England to immediately move to higher ground as quickly as possible as similar waves are expected to hit within minutes.’

08:25 BST 14th June 2020 Transcript from BBC Radio Shetland.
‘I repeat again. Please move away from the coast as quickly as possible. The sea has already receded and a substantial tsunami is expected to impact within minutes. Please do not stop to film this event on your mobiles. Please just go. If you cannot go move up to the highest floor of the building –’
[at this point the transmission stopped as the initial wave impacted Lerwick, destroying power lines]

08:30 14th June 2020 Transcript from the BBC:
‘We are now receiving reports of waves of up to twenty metres in height hitting the Shetland Islands. It is likely there has been very substantial loss of life. We repeat the warning to move immediately away from the shore along the entire north-east coast of Scotland and north-east England, or if that is not possible to move as high in the building you are in as you can.’

09:45 14th June 2020 Transcript from the BBC:
‘To summarise events, after what appears to be the near complete immersion of the Shetland and Orkney Islands, we are receiving reports of large waves of up to six metres in height hitting the east coast of the United Kingdom, with the cities of Aberdeen, Dundee, Edinburgh and Newcastle being particularly hard hit. It is feared there has been very heavy loss of life. Communications with the affected areas are very difficult as almost all electrical power has been lost in the coastal regions, so the exact status of most impacted towns cannot be ascertained. It should be noted that there is still a danger of smaller secondary waves hitting the coast and that no one should attempt to reach the affected areas. All roads to the coast are reserved for the use of the emergency services and of the Armed Forces, who are moving to assist.
The Prime Minister has called a Cobra meeting after being flown out of London with other ministers, as there is a likelihood that water levels will rise in the capital, although the increase should not be more than two metres. Abroad, Norway, Iceland and the Faroe Islands have also been badly hit. The European Union has moved to aid those areas and has also offered help to the UK. Further afield the Americans have said they stand ready to assist, and the Japanese, themselves too familiar with the devastation that this kind of event can cause, have offered the aid of specialised rescue teams.’

Transcript of Service of Remembrance, 14th June 2021, First Anniversary of the Slide.
Nicola Sturgeon, First Minister of Scotland:
‘We stand here today amidst the devastation of Peterhead to remember those who lost their lives one year ago, at sea, on the Shetlands, in the Orkneys, and on the mainlands of both Scotland and England. We also remember those who died abroad, in Norway, on the Faroe Islands, and in Iceland. Those countries are holding simultaneous ceremonies this morning. We are united with them in grief and mourning at our mutual loss. We must also remember those citizens of the many other nations who died or lost loved ones. There are far far too many to list on any memorial; whole families, whole communities, whole towns, whole cities even, gone in a few seconds as the sea rose in fury. We can only remember them, and thank the many nations who rushed to our aid.’
‘Shortly the warning sirens will sound to mark the exact moment the earthquake struck a year ago. When they go silent I ask you to to also go silent for five minutes in memory of the 500,000 people who died during the Slide of 14th June 2020.’

The unadorned horror of the impact of an unfolding natural disaster is brilliantly conveyed via stark, terse on-the-spot missives in The Fourth Storegga Slide, Dominic Bell's winning entry in WN's competition for epistolary short stories.

Dominic has used a range of methods of communication, each one conveying a pivotal moment in the unfolding crisis. The effect of immediacy he's created is powerfully effective, allowing a heart-in-mouth reading experience as the tsumani is triggered and builds inexorably to its terrifying peak of destruction.

Written in unadorned prose, The Fourth Storegga Slide has the immediacy and mounting tension of a disaster movie, with the dramatic devices Dominc chooses mimicking the credibilty of a live-feed news report. Each missive progresses the narrative, and as the wall of water advances on Britain and Scandanavia, the reader is gripped by a similar sense of shock and panic as they would if they were watching it happening in real-time.

The Fourth Storegga Slide offers immense scope compressed into a thrilling short story. This is skilled, controlled storytelling that has been finely crafted. It's all about creating an effect and setting it out for the reader, one step at a time. Using various methods of communication works wonderfully well in this story to convey the magniture and scope of the disaster, and the multiple voices of people affected by it.