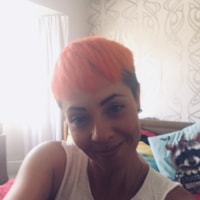 Amanda Marples is an academic mentor living in Rotherham with two noisy children. This is her fourth competition win. She is about to complete her creative writing MA at the University of Sheffield, after which she intends to start sending out her novel. When not writing, she enjoys going out on her skateboard and falling off it, then blogging about at motherboardskate.wordpress.com. She really is old enough to know better.

Empathy, Amanda Marple's tender, intimate account of watching television with her son, was the outstanding entry in our competition for creative non-fiction - a form of writing also called narrative non-fiction that uses literary devices to create narratives that are factually accurate but have the qualities of fiction. Life-writing comes under the heading of creative non-fiction, and Amanda's slow-burn account of maternal love wonderfully amplifies the extraordinary qualities of an experience that might be viewed as everyday: watching TV reruns with her children.

Beautifully written and perfectly paced, Empathy uses a quiet, intimate experience to tell an all-encompassing story of the textures, depths, joys and anxieties of a parent's love for their children. There's such depth and warmth in this account, but beyond the moving, lyrical depiction of the bond between this mother and the child on her lap, Amanda has added delicately layered a mirroring story that gives Empathy much of its emotional resonance. The account of the beloved boy on Amanda's lap watching the older boys auditioning on the X Factor is paralleled with the story of Amanda watching the boy's mother watching her sons and feeling their shared emotion; the two mirrored stories turn this from an account of one mother's love to a universal story about motherhood. It's beautifully crafted. This story about the powerful tug of small things is resonant with telling details, beautifully rendered: the boy's dirty nails that need cutting, the palms that are like his his mother's. Amanda deftly conveys the physical quality of her experience: the feel of the boy's hair; the hitching of his chest as he's overwhelmed with an emotion he can't explain; the way his emotion is transferred to her and she can't withstand it even though her adult brain can logically explain its causes.

This account of a parent's love strikes a particularly authentic emotional chord because the experience Amanda conveys is neither sentimentised or idealised. There's grit in this story: the child is sticky with jam, and dirty; the relationship with the children's father is loving but its imperfections are acknowledged; there are knowing, adult responses to the way TV audiences are manipulated to create a strong emotional response. It is a powerful, impressive piece of writing with a quiet lyricism that leaves a lingering impression.