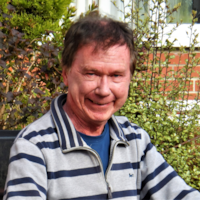 For Love of Polly

Malcolm Welshman is a retired vet and author. He was the My Weekly vet for 15 years and has written many features for magazines such as She, The Lady, The People’s Friend, Cat World, Yours, and newspapers such as The Sunday Times and the Daily Mail. He is the author of three pet novels, the first of which, Pets in a Pickle, reached number two on Kindle’s bestseller list. His third novel, Pets Aplenty, was a finalist for The People’s Book Prize 2015. His latest book, An Armful of Animals – published September 2018 – is a memoir of encounters with creatures as diverse as a cow stuck in a tree and a red-footed booby. A fourth pet novel, Pets are a Pleasure, is due to be published this autumn. Malcolm is also an international speaker on cruise ships, having completed 47 such engagements over the past eight years. He is a bi-monthly contributor to a local community radio, Keep 106 in Dorset. Website: www.malcolmwelshman.co.uk

For Love of Polly By Malcolm Welshman

Retired vet Malcolm Welshman is a veteran teller of animal stories, but there's a freshness and charm to his account of his boyhood relationship with his first pet that made it stand out as the runner up in our creative non-fiction competition.

Malcolm uses humour to tell a story of a growing relationship between his younger self and his parrot, Polly. But beneath the light-hearted anecdotes about funny incidents connected to Polly, Malcolm's story is a touching one of a deepening bond with his pet and the effect it has not just on his personal life but on his career as a vet. It's also, as its title spells out, a love story - anyone who has shared a bond with a beloved animal will be able to relate to the deepening relationship between Malcolm and his parrot. It's well-crafted, with an emotional cliff-hanger – will Polly survive the operation carried out by the young vet? – right at the beginning of the piece, so that readers are invested in knowing not just the outcome, but the story of the developing friendship between the young Malcolm and Polly. Malcolm writes with a light touch but humour is always in the service of the warmth and kindness that make this an appealing as well as entertaining story.

The comic elements are never heavy-handed, and one of the reasons the humour in the story works so well is that it's self-deprecating. Malcolm sees the world in a humourous light, and includes himself in that world-view: he has taken his story seriously, but not himself, and in this account he makes it very clear that he is not the star of this particular show. This endearing story is all about Polly, the parrot that helped Malcolm the boy, through the rite of passage his story depicts, to become Malcolm the vet.