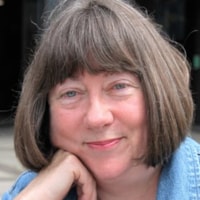 Eileen is delighted that Sloth came second in this year’s 750-word competition. A latecomer to creative writing, she graduated from Wrexham Glyndwr University in 2017 and has lived behind a keyboard ever since. Her short story Waiting for Gertie won WM’s 2016 Dialogue Only competition, She has had several short stories published in magazines and anthologies in the UK, Australia and America.

Brian’s always been a bit slow.  Oh, I don’t mean in the brain department, he always scored well above average in those online IQ tests. But you ask him to nip to the corner shop for a loaf and a lottery ticket on a Saturday afternoon and they’d have announced the winning numbers before you saw him again. I mean, it’s less than 500 yards door-to-door; the kids had a tortoise that walked faster than Brian, and she was seventy when she escaped.
They’re all grown up, the kids; moved away and had families of their own. So it’s just him and me. They used to visit, Christmas and holidays and such like, but all that stopped a few years ago, when he first began to change. I don’t suppose they’d recognise him now. I hardly recognise him myself, especially after he let his hair grow and stopped shaving.
Then, two years ago, when we had that really hot summer, he started spending more time in the garden. Said he enjoyed communing with nature and sleeping out beneath the stars. I left him to it. To be honest, it made no difference to me. The house stayed tidy for one thing, and since Brian changed to a vegetarian diet, I don’t have to cook as often.
You’d have thought all that healthy food and outdoor living would have improved things, but he’s just as lazy as ever. Just hangs around doing nothing. I’ve had to tell our nearest neighbour he’s taken up meditation, so she won’t think it’s odd that he never seems to move. There have been a couple of times when I wondered if he’d died. Well what would you think if your husband was still in the same position after you’d been out with friends for the day?  I didn’t like to get too close, just in case, so I poked him with the clothes prop until he screamed at me to go away.
He’s started doing that recently – screaming. I pretended it was cats fighting when our supermarket delivery driver commented on the noise coming from the back garden one Saturday morning. Luckily he believed me and suggested a bucket of cold water might deter them and offered to help. But I said I’d got it sorted and he left.
Actually, I must get the hosepipe out. Brian hasn’t been inside the house for six months now, not even to use the toilet. I usually stay at the top end of the garden, leaving the other half for Brian. There are mature trees, planted before we moved in. The kids used to have their swings there, and one year Brian built them a treehouse to play in. I think that’s where he’s been living. It’s difficult to see as a jungle of brambles and shrubs have grown up around the area, keeping it private and enclosed. I swear it has its own, rather smelly, microclimate.
I unroll the hose and drag it along the path, then go back to collect the carrier bag I prepared earlier, and to turn the tap on. As I retrace my steps to the bottom of the garden, my eyes sweep the area looking for Brian. He’s excellent at camouflaging himself and it takes several minutes for my eyes to adjust to the patterns of light and shade.
All is still and quiet. There! I catch a slight movement in one of the trees. It’s Brian, hanging from his favourite branch, arms and legs wrapped around it like a limpet. He slowly turns his head as I shake the carrier bag full of lettuce and cabbage leaves, with a few chopped tomatoes thrown in for good measure, to attract his attention. I place it on the picnic table then turn the nozzle on the hose, directing the spray onto Brian’s long fur. I swear it’s turning green. He’s got algae growing in his fur! I’ll have to check online later in case it’s dangerous.
Brian doesn’t move, just hangs there looking at me with that soppy upside-down grin on his face until I’m done. He makes no move to shake the water off, just smiles that stupid smile and hangs there, claws digging into the bark, as water drips from his fur. I turn the hose off and spread the salad leaves onto the table. He’ll come down when he’s ready to eat. As I drag the hose back to the house, Brian starts screaming again. In the distance, something screams back.

Both winners in WM's 750-word short story competition feature first-person narrators. In Sloth, Eileen O'Reilly's runner-up story, the narrator's voice engages the story's readers from the off. Confiding, conspiring, chatty, colloquial as she chunters about her husband Brian, the narrator's personality shines through, filling Eileen's readers with a sense of confidence that they will be entertained as they read on.

It's a lovely comic tale, detailing the idle huband's lifestyle. Eileen lets her story build gently - at first, Brian's behaviour could easily be attributed to lifestyle changes after the family's children left home. He's lazy, he's letting himself go - and Eileen's readers happily go along for the ride. Hints about his transition are dropped - his vegetarian diet, his outdoor life, the fact that he just hangs around doing nothing. The comedy builds and builds from there into an effective comic monologue based round the central premise of lazy Brian literally metamorphosing into a sloth, that really tickles the funnybone and is a complete pleasure to read.