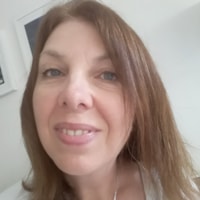 Jeanette Lowe is a southerner now resident in South Yorkshire. She’s a former specialist literacy teacher who escaped the grind to do an MA in Creative Writing at the University of Sheffield, which she has now completed. She’s currently unemployed but trying to avoid going back to teaching.

I’ve just had a pay rise, he says, and there’s your redundancy. Stop worrying. See your friends, go shopping.
She does go shopping, she fills their wardrobe. She lunches with old work colleagues, pizza, tapas, and that new place, Turkish. They soon run out of things to say.

The new clothes rustle and waft as she slides open the glossy doors. They dangle like demi-people, heads and limbs severed. Ghosts. She slides the doors shut again, roams the house, goes into bedrooms where snotty toddlers once crawled. Bathrooms, lemon-scented and gleaming from the cleaner’s buffing. The dining room, little used. The utility room, where the ironing gets done. His shirts, her silks.

There are other places. The attic with a pull-down ladder. One day she yanks it free, climbs up and flicks the light-switch, wondering what’s in the boxes, why they keep stuff they never use. Her long painted fingernails prise open her old trunk, picked up at some junk shop years back. Decades. She stands and watches the dust float and swim. Then she looks inside. Fraying straw hats, and the black platform boots she wore when she was a teenager. The old rucksack she took to Thailand a year before she met him, dark blue canvas and cracked leather straps. A scrawny stuffed lion, browning paperbacks. Diaries she daren’t open in case the essence of her younger self escapes, wraps her, suffocates her.

Her mother’s water-ringed bedside cabinet sits by the chimney stack. It opens with a little verdigris key. She brings up a bottle of whiskey, a tumbler, places them inside. Lugs up a fluffy cream-coloured rug, adds a satin cushion from the bedroom. Lies back, only aware of soft radio-voices in the kitchen far below. She pours and sips. Pours some more. Loses her sense of where she has belonged.

She gets out of bed, opens the blind. There’s no sign of him. No towel on the shower room floor, no crumpled sofa cushions, no scummy mug on the coffee table. A text. Sorry darling, worked late, checked into the Travelodge.

After her granola she goes up into the attic and reaches for the little key.

Later, much later, she creeps back down with the rucksack, legs feeble. Dusk is settling, she doesn’t know how long she’s been gone, day-dreamy, stuck.

She lays the rucksack on the bed. Gives it a sniff, fiddles with the buckles and straps. It’s a little musty but it seems intact. She looks out the window, sees it’s been raining.

She brings up strong coffee and opens drawers. T-shirts, sandals. Jeans, jumper. A waterproof. Phone and charger. Credit cards. She laces on her comfy walking boots.

Lingering in the hallway, she considers leaving a note. She decides to text, Good luck, darling. She swings the rucksack onto her back, locks the front and posts the keys back through the letter box. Looks up. Day is sliding into night.

Of course every word has to earn its place in an effective piece of flash fiction, but it is also deeply important to consider what kind of story works best at that length, and Jeanette Lowe's Loft Conversion is a wonderful example of the way a significant moment or episode can create a rewarding story. With the entire focus on the transition between one life phase and another for its viewpoint character, Loft Conversion provides is a heightened, intense reading experience of a life-changing shift in perception.

The narrative POV is such a close third person that it conveys interiority and immediacy. The elliptical, impressionistic style suggests lived experience, as thoughts filter in. The very first line plunges the reader into an in-between space where the narrator has lost her job and doesn't know what the next phase of her life will hold. Her husband suggests conventional occupations: shopping and lunch, but they're not satisfying. What the character requires is to retreat into and discover/rediscover a space that is both actual (the loft) and imaginative (her own relationship with the past).

The pivotal point in the story is the discovery of the mother's cabinet, which enables the POV character to rediscover her teenage self, already suggested at in the objects in the loft. Jeanette writes with subtlety, choosing and layering her words and images very carefully so that the reader is shown a progression from finding old boots and hats to the central character retreating, in middle age, into the dreamy torpor of her teenage years - another transitional period. The details act like carefully set gems, focussing attention and illuminating how they are set and how each one contributes to the overall picture for the reader.

Emerging from her chrysalis state in the loft, the POV character is ready to leave a life she's outgrown and embark on a new one. There's no attempt to explore how this might pan out, and doing so would have been redundant, because Loft Conversion so wonderfully captures, and illuminates a point of change.