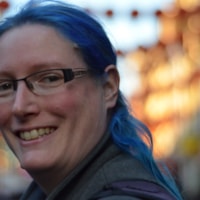 Annie Percik lives in London with her husband, Dave, where she is revising her first novel, whilst working as a University Complaints Officer. She writes a blog about writing and posts short fiction on her website (www.alobear.co.uk), which is also where all her current publications are listed. She likes to run away from zombies in her spare time.

The Game By Annie Percik

The children play in the dappled sunlight as their mothers chat from deck chairs arranged in the shade.
It’s a complicated game. The rules were devised by Daniel, always the deep thinker of the group, but it’s clear that Annabel is the one in charge.

Ben, the follower, the meek one, does as he is told, moving to the designated spot in the centre of one pool of sunlight. Daniel nods in satisfaction. Annabel has understood his vision and is now ensuring its implementation. All is good.

The children have known each other their whole lives. It’s a group born, literally, out of a pre-natal yoga class their mothers all attended. Their birthdays fall within a span of six weeks and they have been in and out of each other’s houses as if they all belong to one big family.

‘Now you need to get to that spot without stepping on the dark bits,’ Annabel says, pointing.

The wind rustles the leaves of the trees overhead, making the sunlit patches of ground ripple and shimmer.

‘Quick!’ Annabel shouts. ‘Before the ghost steals all the light!’

Ben scrambles to obey. The rules may be Daniel’s but the story is Annabel’s. She always takes the bare bones of what Daniel provides and turns them into an epic fantasy that transforms their games into adventures.

Ben might not have helped with the creation of the game, but he’s by far the best at it. He doesn’t fully understand the rules, but Annabel’s instructions tell him what to do. He leaps from one circle of light to another, nimbly avoiding the dangerous shadows where evil spirits lurk and lands securely at his destination.

‘Yay!’ Annabel calls out, throwing her arms in the air. ‘You’re safe! The ghost can’t get you now. But you can’t move until me and Daniel have made it too, or it’ll be able to find you again. And if we get caught, it’ll eat you too.’

Ben looks alarmed by this turn of events. But he stands firm on his spot and pulls Annabel to safety when she stumbles on the last jump. They arrange themselves at the edges of the circle, trying to make enough room for Daniel. But the wind is their enemy, shifting the parameters of their designated haven beneath their feet. Annabel topples first, pulling the boys down with her until they end up in a pile on the ground, shrieking and laughing as the ghost claims its victory.

Their three mothers look over at the noise, quickly reassured by the sounds of joy beneath the imagined terror. They dream a future for their children. Annabel will be CEO, of course, while Daniel will head up the Research & Development division. And Ben? Nobody is sure where his strengths will lie yet. But he’s got time to shine. And whatever role he ends up taking, no doubt he will keep the ghosts at bay for his friends.

Annie Percik's The Game, the runner up in our 500-word flash fiction competition, is a fine example of the way a short piece of writing can suggest more than one intrepretation.

The game in question is being played by three children – Annabel, Daniel and Ben – as their mothers watch. Annie crafts the story in such a way that the children's imaginations are foregrounded and the 'ghosts' created by Emma's imagination that give the game its pleasurable frisson of fear take on their own resonance, giving The Game an uncanny sheen that borders on speculative fiction.

The cleverness of The Game is that it works on two levels: as a straightforward account of a children's game that suggests what the participants may grow into in the future, and as a work with paranormal overtones that implies the ghosts are active potential players and Ben is a savant, or a person in possession of special powers.

Annie's writing in this piece is tight and fine-tuned, with each word and well-chosen detail contributing to the overall effect. The contrast between the clarity of the writing and the ambiguous strangeness of the circumstances creates an intriguing tension between what is said and what is being implied.

Although it works perfectly as a standalone piece of micro-fiction, The Game would also have the potential to work well as an introduction to a longer piece of writing that goes more deeply into the themes and characters it introduces.