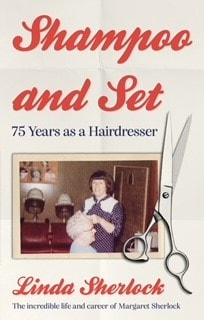 At the age of five, Margaret Sherlock decided to give herself a haircut with a cutthroat razor. It was the start of a lifelong obsession with hairstyling.

At the age of five, Margaret Sherlock decided to give herself a haircut with a cutthroat razor. It was the start of a lifelong obsession with hairstyling.

In 1945, as a fifteen-year-old, she cycled daily to her hairdressing apprenticeship in Northern Ireland, having earned her fees by scrubbing and polishing floors. In June 1956, she opened her own salon in the market town of Chorley. Little did she realise that it would lead to a career lasting over sixty years. From Lancashire Wakes Weeks and Walking Days to the ever-changing world of hairstyling with some interesting characters along the way, life was not without its challenges.

Shampoo and Set is Margaret’s inspiring story and one of determination and hard work. It is proof that if you find a job that you like then you never feel that your work is done even at the age of ninety in the midst of a pandemic!

Linda Sherlock first went to the hairdressers at just ten days old. Her mum, Margaret, brought her home from the hospital and that afternoon opened her hairdressing salon in the front room of their terraced house in Chorley. As a teenager, Linda worked in the salon as an apprentice for the sum of fifty pence per week plus tips.  After pursuing a career in education, life came full circle and she joined her mum in the salon doing everything but the hairdressing. Linda’s monologue, The Exile’s Child, was performed and recorded by the Green Curtain Theatre Company, London in 2019. She has also contributed to a number of academic publications and various magazines. Her writing has been featured by the BBC and she is a member of Chorley Writers’ Circle.