Lulu Allison: What it's like to be longlisted for The Women's Prize Obviously I wasn’t expecting this.

Obviously, experience had cautioned me not to be foolish enough to expect this.

Pragmatic acceptance of the realities of a life in the arts had trained me not to expect this.

And still it happened.

My book Salt Lick was selected for the longlist of the Women’s Prize for Fiction.

I’m delighted to say it has significantly dented one of my favourite jokes - that I am a high achiever who hasn’t achieved anything.

It’s absurd. And it is of course incredibly uplifting and exciting. I feel very lucky.

I began writing by accident. I’ve said that enough times for it to sound glib to me, but it is true. I started an art project that involved writing, and unexpectedly learned that my lifelong love of books had another, more demanding iteration. That project became my first novel Twice the Speed of Dark, published by Unbound in 2017. My slightly unconventional path into writing has for many reasons felt to me to be at least useful if not, once again, lucky.

I learned quickly that not much would necessarily happen as a result of my book’s publication, but I learned too that there is great joy when readers respond to one’s work. On this scale the actual number of readers is secondary. The fact of them is golden. The tally only matters when one has hopes of writing full time. But I have been an artist most of my adult life so my expectations are well and truly managed on that score. Of course, dreams flash through any active mind but dreams are so often held by their dreamers, carefully, lovingly, far from expectations.

It seemed possible that my second novel Salt Lick might raise career prospects another shallow few steps, but I expected, and still do, that I would carry on with the mosaic of jobs I have always had.

Many of us in the arts will know, or have known, this mosaic. These are some of the paid jobs in mine: bar, nightclub and restaurant work, illustrator, cleaner at Amsterdam Central Station for a week, shop assistant, scuba diving instructor, artist educator, artist, maker, costume maker, t-shirt designer, mural painter, factory worker, domestic cleaner. I have been paid small amounts for music, art, making, writing, designing. I’ve probably earned the most for cleaning and art education. There is nothing particular about this list, many will recognise it, and many will know that alongside, being carried by these jobs, is the other work; the making of art, music, writing that wasn’t paid, or sometimes even seen.

This is not a moan, it’s just how it is. But it was pulled into focus when an arts journalist on Radio 4, discussing the newly published longlist noted that several of the authors, for perhaps the first time ‘did other things’. I found it extraordinary that this was worthy of note. Not to sneer at the observation, for it is a legitimate one. But it seems so magically unlikely for someone just to do their thing, that one thing. And yet, they do.

It is another mark of good fortune, to have been in this time and place when the Women’s Prize has selected from a wider pool of submissions. There are notably more independent publishers on the list, and I am proud to be published by one of them. There are many nations represented, and several debuts alongside established authors. The ones I have read so far have perhaps given me the greatest sense of pride - to be there with them is, well, it’s hard to express without more goofy grinning talk of luck and joy.

I don’t know about my fellow longlisted authors and what ‘other things’ they do. But I do know about my friends and colleagues, artists, writers and musicians, other wonderful writers at Unbound. Many have so much more resilience and determination than I, completing their writing in scraps of night time, once full-time jobs and family have accounted for most of their waking day. I don’t really know how they do it. But collectively we wouldn’t have culture at all without this bedrock of determined dreamers who keep on making.

All artists, writers and makers stretch out hands, build little bridges, set forth in ingenious boats, to connect, to reach an audience, or to reach for recognition or reward. Whether the destination is achieved or not, there would be no culture, none at all without the ones who set out on such beautiful, uncertain journeys. It is a credit to the Women’s Prize, and a hope for future acts of recognition, that they have in turn, set out to meet some of us half way. 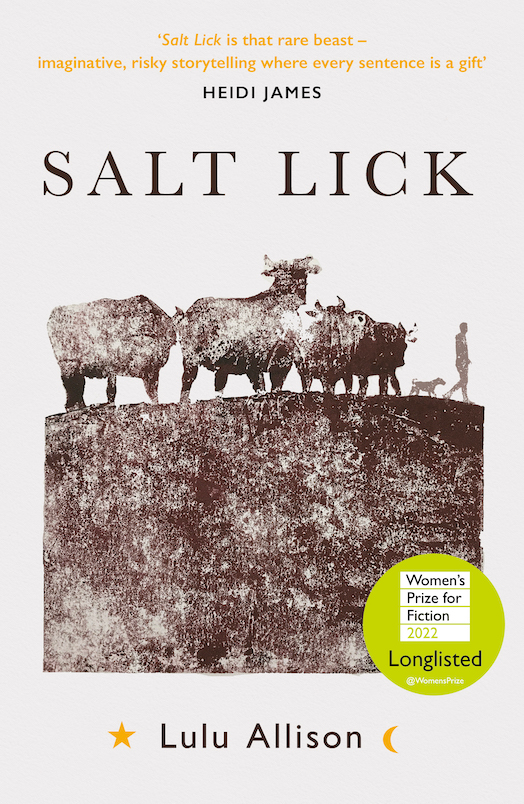 The Women's Prize shortlist will be announced on Wednesday 27 April. Salt Lick by Lulu Allison is published by Unbound.

Read how Monika Radojevic, the winner of the Merky Books New Writers' Prize 2020, turns questions about social and gender inequality into powerful poems.