How to write family stories in fiction Great family stories, like Jeffrey Eugenides’ Middlesex and Alex Haley’s Roots, remind us that our own stories do not merely begin when we are born and end when we die, but transgress our own lifetimes to overlap with those of our ancestors and descendants. I knew I wanted to write such a story, where the past shapes the present and the future.

There is plenty of narrative possibility in exploring how the lives of one generation impact the generations that follow. Families are also microcosms of society. Creating a wide cast of characters in The Halfways who have their own agendas, but are tied together by family connection, meant I could deep dive into personal relationships and family politics. It gave me the freedom to navigate the gulfs between generations, the disparities in education and earnings and the differences in values and faith.

The immigrant experience heightened the drama as there is deep emotion to be found in the pull of another homeland, allowing for an exploration of all manner of complexities: the tangled roots of heritage and legacy; how traumas can be inherited over generations and cause tragedies in unforeseen ways; and how time and distance may not lessen such traumas, but can instead complicate them. There is extra intrigue in unravelling the immigrant family story; while all families have secrets that get buried, immigrant families have secrets that get left behind.

Despite this abundance of narrative tension, I encountered many challenges in writing the story of the Islam family. Oscar Wilde is often quoted as saying, 'What is said of man is nothing; the point is, who says it.' Deciding on a narrator felt as though I was being asked to pick a favourite child - and which parent would ever admit to having a favourite! All the main characters vied for my attention. There is Nasrin, the stay-at-home mum who feels perpetually displaced and discontented; there is the fiercely ambitious Sabrina who is determined to scale the heights of the banking world at all costs; and then there is Afroz who is miscast as a subservient, Bangladeshi housewife.

Initially, I settled on Elias, Nasrin’s son, as the narrator. After numerous redrafts, however, I realized that, as the most removed from the drama but the most impacted, this was not Elias’s story to tell. Instead, it was a story for Elias to receive. Elias’s sense of wellbeing is bolstered by his understanding of his family story and how he fits into it. As Elias says in the opening pages of the book: 'Each story has helped light his path: each bit of history a beam in a flood of darkness, revealing to him something of life’s circularity, of its inherent wisdom and simplicity. Their stories are the bones of his being.' This was a family history narrated for Elias using the multiple perspectives of the women who had 'mothered' him. The importance of story is a recurrent theme and impacted the structure of the novel too. Interspersed throughout the novel, there are flashbacks to each of the character’s pasts, which are narrated in a standalone folkloric style. Underpinning this is the knowledge that a positively framed, shared story can strengthen family bonds by helping to shape a collective identity.

One of the pitfalls of using multiple perspectives was finding ways to move the story forward when characters are impacted by the same event without undue repetition and problems in pacing. Another challenge was ensuring each voice was authentic and using research to build the individual worlds of each character. Nasrin and Sabrina are an amalgamation of women I know whose lives are characterized by the duality of being both British and Asian, but their careers required some research. It was more difficult to imagine the lives of the older generation, and I had to remind myself of the universality of human emotions, regardless of time and place: even in Shamsur’s childhood world of no radio or television, there was scope for fandom – if my nine-year-old could learn the words of her favourite Lady Gaga songs, why couldn’t Shamsur learn the words of his beloved Lalon as he listened to wandering minstrels singing them as they journeyed through the village? Researching Fakir Lalon Shah, a philosopher, singer and composer, took me down a rabbithole: sifting through the abundance of academic literature on the Baul singer tradition from which Lalon hails was an arduous process. Furthermore, Lalon’s songs were passed down in the oral tradition and finding consistent translations was difficult. Nonetheless, the research was important as Shamsur’s character drew great inspiration from the bard’s nomadic egalitarianism.

After creating the individual worlds of each character, the biggest challenge was orchestrating each of those character arcs to both transform the inner lives of the relevant character but also to coalesce under the larger themes of the novel: what happens when the ties that bind us are challenged? What happens when lies become the backbone of our relationships and we have to re-invent ourselves when the truth comes to light? I wanted to give my cast of characters – the banker, the ex-pilot, the housewife, the restauranter and the chef – an appreciation that their individual stories begin long before they are born and that in order to fully understand themselves, they must first understand their family. 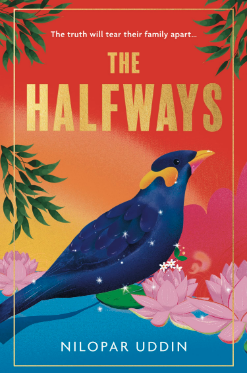 The Halfways by Nilopar Uddin is published in hardback by HQ at £14.99

Read about Hafsa Zayyan's experience of using family history in her prizewinning novel We Are All Birds of Uganda.