How to write comedy What surprises most people, myself included, is how hard writing comedy is. I started my writing journey by writing dark suspense stories, and assumed that they’re one of the harder genres to tackle. But when I branched out into comedy, it was a rude awakening. The learning curve with comedy is so very steep. I find that when I read dark suspense, when it’s not done well, it’s still easily forgiven because I still want to know what happens next. But when comedy flops, it is PAINFUL. We’ve all been there with the cringe-worthy moments that are so awkward you want to hide under a rock.

So! How did I overcome this?

With Dial A For Aunties, my novel which won the Comedy Women in Print Prize, I made sure that every joke I made, every humorous scene I had, was borne out of something authentic. I drew on my own personal experiences and made sure that every scene retained something real, even if the plot is about moving a dead body through a billionaire’s wedding. The plot of Dial A is very outlandish and requires a lot of suspension of disbelief. To balance this out, in each scene, I asked myself: “What would my parents do if there was an emergency? What would my aunts and uncles do?” And every single time, I would come up with several options, because of course there is always a multitude of possible ways that someone could react to any given situation. Then I would choose the one that feels the most authentic.

For example, when my main character Meddy comes home with her blind date who she’s accidentally killed, her mother immediately calls up her aunties for help. I thought long and hard about this and kept asking myself what my parents and aunts and uncles would do in this case, and although I’m sure they would deny it, I feel in my gut that they would call each other first. Then, as Meddy waits for her aunts to arrive, her mother insists that she cut some fruit for them. This may seem ridiculous, but honestly? We’ve had some family emergencies before and my dad was like, “Hang on, we need to prepare food for your aunts and uncles first!”

There is also a big difference between sharing the joy of something versus making fun of it. I made sure that the tone of my book is not “Look how ridiculous my family and culture are” but instead, “Look how far my family would go to protect me if anything like this ever happened.” I don’t find mockery funny, and I think it’s important to make sure that your comedy comes from a place of love and respect. It’s really much easier to laugh with someone than to laugh at them.

One method that I used to make sure that my audience is laughing with my characters instead of at them is to make my main character the “everywoman.” Meddy is relatable, because she is so average in many ways. She’s dissatisfied with her love life and her career and longs for independence from her overbearing family. Who hasn’t been in that situation before? So Meddy is our anchor, and once we have an anchor, it means we can go all out with the supporting characters. The fact that Meddy is so serious and reacts in a typical way to the accidental murder balances out the aunties’ over-the-top reactions and terrible decisions. So if you’re thinking of writing comedy, think of how you can balance out the humour with the more serious parts. Even in comedies, there has to be some serious bits to highlight the humourous ones. If you only have funny bit after funny bit, it would get tiring after a while.

Comedy is tricky to get right, but as long as you stay true to what you know and approach it with respect and care, before long, you’ll find your audience giggling along with you. 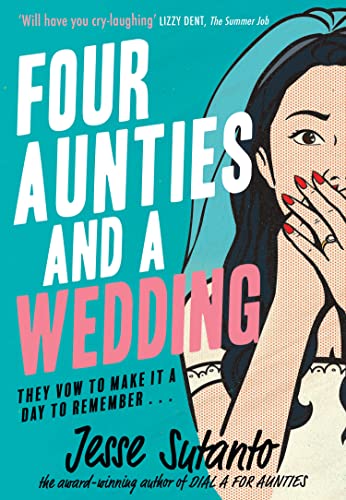 Dial A for Aunties, by Jesse Sutanto, won the 2021 Comedy Women in Print Prize. The follow-up, Four Aunties and a Wedding, is out now (published by HQ)